As an author whose training is in philosophy my only apology for Continuity and Rupture's "excruciating" aspects is to appeal to my discipline: this is what we do in philosophy––we make arguments, we focus on making sense of a theoretical terrain. While I appreciate that this training might make the text more "boring" than a short screed about movementism, I also think this approach is important for making sense of Maoism. Arguments indeed need to be asserted and reasserted in order to justify the claims of MLM if we want to wage a philosophical line struggle. Maybe such a struggle is ultimately unnecessary, though I would disagree. In may ways Continuity and Rupture was dictated by the fact that philosophical agitation was currently lacking in the Maoist camp and I felt that it was necessary to make a few small steps towards this agitation. Antipathy towards this ethos strikes me as antipathy towards reasoning out an argument, which is more evidence as to why this book (and others that will hopefully do better than my offering) is necessary. But  even if you have found Continuity and Rupture mind-numbingly excruciating, or even yawn inducing, at some parts, I do appreciate your support––your willingness to purchase and read the book––and would hope that you would find something useful, or at the very least could provide helpful critiques. I promise that my next book, that I'll be publishing with Kersplebedeb in Spring 2017, will be less turgid… Though the book I have planned after that, I'm sorry to admit, will be even more "philosophical" and thus, for those who found Continuity and Rupture less "fun" than The Communist Necessity, possibly unworthy of support.

For those who have not yet purchased Continuity and Rupture but are still interested in doing so, if you are living in Canada then it might be worth your time to wait until one of the upcoming book launches planned in several Canadian cities. If you live in one of these cities (which I'm going to list below) I would in fact greatly prefer that you purchase a copy at the launch rather than ahead of time so as to support the bookstores and groups that have arranged for the launches. Here is the current roster of planned book launches:

1) Toronto: January 14th at Another Story. I will be introducing the book as part of a panel designed to talk about the importance of Maoism for organizing in the city.

2) London, Ontario: February 4th (or 5th) at the University of Western Ontario through the department of Theory and Criticism. A comrade graciously arranged for the launch to be in the heart of academia; we'll see what kind of discussion ensues.

3) Saskatoon: February 18th at Turning the Tide. I'm trying to see if my job has funds that will pay for me to attend in person since I can't afford the flight otherwise. If not, I'll Skype in.

4) Montreal: either the weekend of January 21st or the the weekend of February 25th depending on Maison Norman Bethune's schedule. There's no way I can do any kind of "book tour" without including MNB which is the bookstore heart of Maoism in this country. 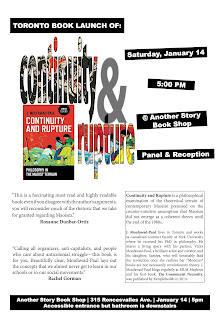 There will also be one in Hamilton, though the date is currently unclear, and I have yet to hear from Ottawa, though such a launch is likely. (Ottawa comrades, contact me ASAP if you're interested!) Hope to see some of you out at these launches.