September 08, 2016
Having finally received advance hard copies of my upcoming book and, preparing for the necessary book launch and promotional activities, I want to alert faithful readers to a number of things I've written in anticipation of Continuity and Rupture's publication. I did them on Medium (as I advertised when the first one was up) mainly as a change of pace from archiving PDFs on this blog. I'm not sure if these writing exercises will help to promote the book (one can only hope!) but they were definitely fun. 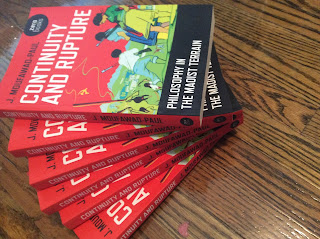 First, there's my most recent and very short article, The Story of Continuity and Rupture. This was written as an article submitted to the online marketing page of Zero Books guided by the ethos of "tell the story of the book in question." That is, I tried to think of Continuity and Rupture like a story and explain something about that story rather than just writing a boring "this is a general summary of my book." I hit upon referring to a short story by an author I really like (an author that I had already used in an opening analogy for an unpublished draft manuscript), and that you should like too if you take the time to read her work, because it analogically fit.

Next there is my extended essay, written in multiple parts, about the concept of the party vanguard that is both tangental to Continuity and Rupture and a kind of bridge between this book and my earlier The Communist Necessity. The first part of this extended essay is an introduction and discussion of Dean's examination of crowds necessitating the party. The second part is about an art metaphor and the "partisan avant garde war machine". The third part concerns "establishment left consensus and anti-revisionist counter-hegemony." And the final part is a short epilogue.

Since the extended essay of multiple parts requires far more attention than the short article about the story of the book I would encourage faithful readers who don't have much time, but who are interested in reading Continuity and Rupture when it is released, to read the short article so as to prepare themselves for the release. Hopefully it makes the book sound interesting. And feel free to share these Medium articles with whoever you think would be interested in purchasing Continuity and Rupture when it finally hits the shelves.