September 22, 2013
For some reason, because we maoists tend to speak of the category of masses, there is often a rather bizarre assumption that, simply by using this category, we are liquidating class categories so as to replace the antagonistic contradiction of bourgeois-proletariat with some amorphous concept of "masses".  Ortho-Trotskyists tend to make this complaint, certain that marxism has been violated as soon as maoists babble on about "the masses" and the "mass-line" and this category that is supposedly meant to replace the class contradiction that determines capitalism.  Indeed, two years ago a would-be critic of maoism made a similar point in a straw-personing of maoism that resulted in a rather hostile post on my part. 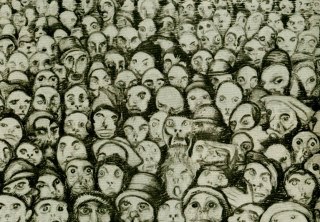 The truth, however, is that we maoists are not interested in getting rid of class concepts in favour of some nebulous category of masses––we did not adapt the USAmerican "tired/poor/hungry masses" platitude as a political axiom.  Nor is our use of masses akin to the substitutionalist concept of multitude that was en vogue in some circles around a decade ago.  In general, there are two reasons for our use of this term.

The maoist utilization of the term masses is first and foremost a semantic problem.  Other marxist trajectories are wont to speak of "the people" and it would be entirely dishonest to assume that this term is meant to be a replacement for class categories.  Only the most dogmatic purist, who demands that proper theoretical language must be used at all times, would chastise leftists for raising the popular slogan "the people united can never be defeated" or some other variant where a nebulous "people" is mobilized.  So when we maoists use the term masses we are often using it in the same semantic manner as people: this is not a stand-in for coherent class categories but merely a word that is meant to imply that there is a massive amount of people out there.

Semantically, we tend to privilege masses over people because it dove-tails with the core maoist concept that is named "mass-line".  We like to be consistent with our theoretical terminology; perhaps if the "mass-line" was commonly translated as the "people-line" we would privilege the term people over  masses.  Whatever the case, there is no reason to assume that the category of masses is erroneous simply because maoists favour it over the general category of people that most non-maoist leftists use all the time.

Connected to the concept of the mass-line, which means "from the masses and to the masses", we maoists like to use the term masses to speak of our attempt to engage the people as a whole, wherever they may be, in order to locate that aspect of the mass of people out there who are the proletariat.  Thus, when we talk about the masses we are also talking about locating the proletariat within the masses of people whose class position and/or consciousness may or may not be proletarian.

There are a lot of people out there––masses of people––and it is our job to circulate amongst these people and figure out, in the process of our circulation, the geography of class.  We want to find the hard core of the proletariat, the most advanced sector of the working-class, and in order to do so we have to investigate mass amounts of people, meaning the masses.

In search of those with a revolutionary consciousness, that is the understanding that capitalism needs to go, and thus ultimately the core of the proletariat for itself, we encounter mass populations that do not, as some metaphysically minded marxists would have us think, radiate some platonic class essence that is stamped into their immortal souls.  The proletariat is not out there as a thing but as a social relationship; it is more than simply "the working class" because there are a lot of people who work these days, especially at the centres of capitalism, who are embourgeoisified (see the theory of the labour aristocracy) and thus do not count as "proletariat" in the revolutionary sense meant by Marx and Engels.  Even adding crude empiricist distinctions such as "industrial working class" doesn't help; we are encountering masses of people who exist at different levels of our social context, and we are part of these masses, and we need to figure out the class relationships of this particular context that demarcate these masses from each other.

Taking simple formulae for complex theory and applying them without thought (hey that guy is unionized at an auto factory so he's definitely proletarian!) leads to class quantification that tells us nothing and, most importantly, cannot produce revolutionary praxis.  Revisionist organizations in the US and Canada have been operating for years under the assumption that the unionized working class is the proletariat, based on tired notions of insurrection and what the proletariat is, which is why they haven't even come close to building a revolutionary movement since the early days of unionization.  The working-class that wants to live, and because of their wages and job security can live (although the recession is changing this fact, but not the desire to have this life), a bourgeois lifestyle with a nice sized home, picket fence, two cars, and three children does not possess a revolutionary consciousness and is thus not the revolutionary subject of history.  They tend to support bourgeois parties; it is not anachronistic that union leadership cozies up to the Democratic Party in the US and the Liberal and/or New Democratic Party in Canada.

Moreover, beyond locating the proletariat amongst the masses there is also the fact that there are other relationships and categories that are possibly revolutionary.  Take, for example, the oppressed nations living within the boundaries of capitalist modes of production that developed from and maintain settler-colonialism.  To this we can add an entire complex of people, confusing populations of various relationships and lines of force, that are, well, quite massive.  The masses is a useful category to explain this larger context of people, and thus is not meant to be some sort of new category crafty maoists have smuggled in to marxist discourse so as to trick naive would-be communists into abandoning the proper categories of proletariat and bourgeoisie.