Maoist (re)Appropriations of Gramsci (promotion and discussion of Amil K.'s "Towards the War of Position")

September 19, 2013
In lieu of producing a completely original post, and in order to prevent the month from going by without much activity on this blog, I'm resorting to the tried and true blogger tactic of referring to other online posts/documents.  Specifically, I want to promote and discuss a document written by the Revolutionary Initiative's Amil K. entitled Towards the War of Position: Gramsci in Continuity and Rupture with Marxism-Leninism.  Those unfamiliar with this recent document, but who are interested in the subject matter of this blog (or, at the very least, are interested in Gramsci) should read this essay which is only the first part of a longer document, the second part of which will be offered, according to the Revolutionary Initiative website, in early 2014. 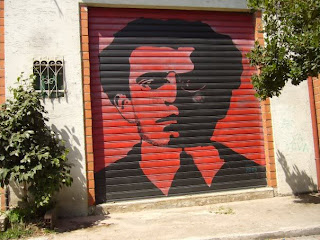 Amil K.'s essay is a reading of some of Antonio Gramsci's key ideas through the lens of Marxism-Leninism-Maoism, particularly Gramsci's concept of "war of position", although other connected and significant Gramscian concepts are discussed.  Moreover, the author attempts to examine this concept's importance for revolutionary strategy promising, in the yet-to-be-written second part, how it intersects with the theory of Protracted People's War [PPW].  Generally, the essay is a systematic engagement with the concept of "war of position" that, in building itself around this concept, is also able to pull in other important Gramscian concepts and foreground them in the historical context of their emergence.

I was very interested in reading this document because, as I'm sure the faithful reader is aware, I made similar and preliminary insights about the work of Gramsci around a year and half ago: first with Gramsci's concept of hegemony; secondly, and echoing (or prefiguring?) the Amil K. document, with the way in which the concept of the "war of position" may be connected with PPW specifically and revolutionary strategy generally.  The resonance of Amil K.'s document with the points I made in the summer of 2012 makes me feel that I was addressing something worth addressing; I'm happy to see that someone has worked out a problematic that I simply noted before dropping.  Since I'm proceeding from the assumption that Amil K. didn't read these blog posts––based, perhaps erroneously, on the fact that they don't show up in the citations––I would like to assume that the resonance is due to the fact that there is something in Gramsci that, refracted through the lens Marxism-Leninism-Maoism, forces a specific reading of Gramscian concepts.  Since, at the time, I thought I was treating Gramsci in a heterodox manner, the fact that there is a similar reading makes me feel like I wasn't entirely off-base.

To be fair to Amil K., however, the aforelinked essay goes far beyond my old posts on Gramsci.  The basic resonance is there, the focus on key concepts is highlighted and for similar reasons, but Towards the War of Position provides a better analytic framework, and a more thorough investigation, in which to apprehend Gramscian concepts as a maoist.  For example, the section regarding Lenin's State and Revolution and its implicit theory of insurrection provides a map of a theoretical impasse inherited from the past, and a possible solution through Gramsci's concept of the "war of position".  This juxtaposition of a Gramscian concept with a key Leninist text is quite enlightening and significant in that it succeeds in rendering the implicit explicit.  Here we find the lacuna of Leninism: the withering away of the state.  But how is this achieved, how can socialism be transcended?  Here, Amil K. uses Gramscian concepts in order to prefigure Maoism––the reading is both thorough and intertextual.

There are innumerable readings of Gramsci that are antagonistic to class revolution.  So many attempts to liquidate his communism, so many attempts to hammer his concepts into anti-marxist moulds.  Amil K. speaks of jail-breaking Gramsci and this is entirely correct: why the hell should anti-marxists lay claim to a theorist that was a devoted communism?  Most importantly: if the concepts that Gramsci was developing through his philosophical intervention on the general terrain of marxism were theoretically significant, we should not allow these concepts to become the property of theorists who are antagonist to his political project.  Indeed, the essay in question begins by pointing out the way in which Gramsci has been appropriated, liberalized, and "strip[ped]… of its clearly communist objectives."

Moreover, it is important to assert some of Gramsci's core concepts in the face of a current movementist trend that would have us abandon revolutionary hegemony for petty-bourgeois autonomous activity that, by itself, will change the world.  Reasserting Gramsci in the face of Richard Day's Gramsci Is Dead, an example of idealist and ahistorical speculation, is always worthwhile.  And far better to refract Gramsci through the lens of Maoism in a thorough and systematic manner, as Amil K. does, in order to combat the movementist utopianism that demands we abandon those theoretical weapons that we need in order to change the world.

My only problem with Amil K.'s essay is its emphasis on continuity-rupture and insistence that Gramsci's work somehow represents a parallel moment of continuity-rupture with Maoism.  Perhaps this is just the trained philosopher in me that believes in keeping categories distinct, especially categories that have to do with the development of theory.  A theoretical terrain develops according to the logic of its boundaries, and the logic of historical materialism implies that the moment of rupture (which is simultaneously a moment of continuity) is determined by class struggle: a world historical revolution is the only thing that can produce the moment of continuity-rupture which is a universalizing moment.  Gramsci did not and could not produce this moment; to suggest otherwise is idealist.

Oddly enough, in the past year I have been working on a manuscript entitled Continuity and Rupture which concerns a philosophical intervention in the field of maoism.  Thus, I am concerned with how this dialectical term is used, especially when it is used inappropriately.  Any investigation into a theoretical terrain requires the drawing of coherent boundaries, especially when it comes to terms such as continuity and rupture––these should not be used just because they feel appropriate, they are necessitated by concrete historical circumstances.  And Gramsci, as an individual, cannot be such a circumstance.

To be less obtuse: Gramsci was an individual and not a revolutionary movement that could produce a world historical revolution, and thus the grounds for a rupture; Gramsci was in prison when he wrote his diaries, wherein these concepts are developed, and so cut-off from social struggle; Gramsci's diaries were never coherently synthesized; and, most importantly, Gramsci was working within a completely Leninist terrain.  That is, he was attempting to answer questions raised by Marxism-Leninism, interrogate contradictions, and figure out the dilemmas produced by what was historically presented by a given theoretical terrain in which he was locked.  A militant philosopher dedicated to these boundaries, much like Lukács or (later) Althusser, might produce unique and significant insights due to the philosophical act of drawing lines of demarcation within what has been presented by the terrain itself, but this is not in itself a rupture let alone the dialectical moment where continuity and rupture are fused.

And yes, as a philosopher of marxism I do take this clarification seriously because I think it means something concretely when it comes to articulating theory.  To speak of Gramsci as representing a moment of continuity-rupture, beyond the problematic elevation of the individual to the level of world history paradigm-shift, is to argue that there is such a thing as Marxism-Leninism-Gramscianism that is parallel to Marxism-Leninism-Maoism.  Is the latter the same as the former?  Are they simply the same thing––are there two concurrent periods in the same science that are equally valid and so should be embraced equally?  Transpose these questions to a theoretical terrain that is representative of another science and these questions are ludicrous: the Einsteinian paradigm necessarily excludes competing paradigms; prefigurations of this paradigm (such as some aspects in the work of Leibniz) are not parallel moments of continuity-rupture but, rather, germinal insights that only make sense in retrospect.

Gramsci was a Marxist-Leninist, and still caught within this province of the overall historical materialist terrain, who developed some significant insights.  I suppose if we were to claim that Leninism is only that which was codified by Stalin's Foundations of Leninism we might have to concede that Gramsci was pushing beyond these boundaries… But this is an exercise in uncritical orthodoxy.  Marxism-Leninism is ultimately that which was ossified through the world-historical revolution in China, asserted in the Communist Party of China's anti-revisionist document Long Live Leninism! Being a larger terrain than the limited Stalin document, philosophers of marxism such as Gramsci, Lukács, Althusser and others were primarily interested in mapping the contours of a problematic they took to be distinctly Marxist-Leninist.  They were not thinking of ruptures; they produced nothing that was, by itself, a rupture from this terrain of theory.  At the most, their insights produced a level of theoretical clarity that, in retrospect, allows us to apprehend all of the contradictions and potentialities of Marxism-Leninism.

And these insights can be mined, regardless of Gramsci's original intentions (if we can know them at all), by maoists who, occupying the only position of continuity-rupture following Leninism (because, like every science, there can only be one position), can seize the germ of conceptual meaning from a context that could not be anything but that context––that is, Marxism-Leninism.  When it comes to historical materialism, it is a truism that the past is apprehended through the present: we will find the germs of the current conjucture in our history even if those who produced these germs were unaware of how their ideas would be rearticulated in historical ruptures in which they were not involved.  We can unlock these insights in retrospect from the position of historical foresight; they did not exist beforehand.  Differentials are not ruptures, let alone moments where rupture is bound to continuity.  This might all seem obtuse, but we can also argue that the theoretical language of continuity-rupture is obtuse: the point is to explain what it means, and Gramsci's theory, in its own place and time, falls short of this meaning.

Even still, what the Amil K. document addresses is significant.  Although I would urge the author to step back from making a category mistake (that is, to not confuse Gramsci's philosophical interventions in the terrain of Leninism with the development of revolutionary science), I am still impressed by their attempt to re-appropriate Gramsci for revolutionary theory in a thorough and historical manner.  Although it is not philosophically appropriate to apply the dialectic of continuity-rupture to Gramsci's concepts, this dialectic should teach us that the concepts Gramsci unlocks, that have just begun to be addressed by Amil K.'s essay, are worthy of thorough investigation, reappropriation, and rearticulation within the terrain of maoism that is the only possible rupture with marxism-leninism. I look forward to reading the second part.