June 19, 2013
As I have noted in previous posts, myself and two other dads planned to work on a collective blog about parenting from a decidedly communist position.  Finally, after all this time, the blog in question has launched.  (Actually, it launched last month but I never got around to advertising it properly.)  Still waiting for a post from the third dad involved, and hoping that there will be regular posting, but at least I can advertise the blog now.

In any case, the blog in question is called Red Diaper Dads and it will contain posts by commie dads that are insightful, humorous, interesting… all based on our different experiences.  So far there are two posts, one of which is quite funny, and hopefully more will follow.  And hopefully some readers will be interested in contributing articles of their own parenting experiences. 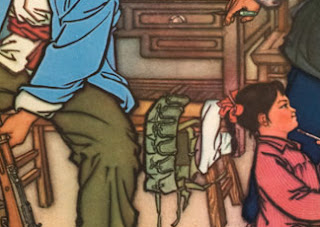 Red Diaper Dads was partially inspired by the leftish blog/community Daddy Dialectic: partially because some of us enjoyed aspects of that blog, partially because the politics primarily expressed in Daddy Dialectic were left-liberal and radical reformist rather than revolutionary.  The hope was to start a blog where revolutionary communists, rather than neo-reformists/anarchists, would talk about parenting in whatever way they wished.

As everyone knows, dads who aren't deadbeat pieces of shit like talking about their children.  This is especially annoying if you do not have children and do not plan to have children anytime soon––I know that parents going on about the "neat things" their kids were doing bored the hell out of me before I had a child.  But now that I have one I have turned into one of those people who bores/annoys everyone else by bombarding them with banal stories about my child.  Thankfully, aside from a few posts, this blog hasn't been conquered by this tendency; hence the reason for Red Diaper Dads which shall serve as an outlet for that kind of blogging.