January 14, 2012
This week, January 14 - 22, has been designated the International Campaign to Support the Peoples War in India.  The call for such a campaign is particularly important due to the recent capture, torture, and eventual execution of Comrade Kishenji.  Clearly the Indian state is frightened by the growing peoples war, the so-called "red corridor", and the surrounding context of revolutionary instability caused by the Kashmiri independence movement, the potential problems still posed by the UPCN(Maoist), and an emergent peoples war in Bhutan. 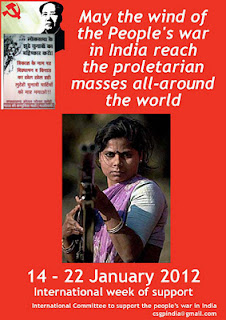 While it is quite common for anti-capitalists and anti-imperialists in North America and Europe to gather en masse for demonstrations supporting Palestinian self-determination, against the wars in Afghanistan and Iraq, or in solidarity with the unexpected uprisings of the so-called Arab Spring, there is a general and disquieting absence of agitation around the recent and significant revolutionary movements in South Asia.  We have no problem pouring into the streets at the drop of a hat because of seemingly "spontaneous" intifadas in Egypt, but we tend to remain [willfully] ignorant of these long-standing armed struggles, even though they possess a political depth, unity, and breadth that the causes we usually endorse (and in thousands in every city) lack.

None of this is to say that we should not continue to supporting the rebellions that have become popular amongst the mainstream left, but only to argue that we need to work harder to become more aware of those other rebellions that, regardless of their size and energy, are not fetishized by both the media and the dominant left imagination.  The peoples war in India is a particularly salient example: unlike Nepal or Bhutan, India is a major player in the world capitalist system (some might argue it is more important to global capitalism and the imperialist camp than Egypt) which faces what Samir Amin, probably the most important anti-imperialist political economist in the last five or six decades, has recently referred to, along with the previous peoples war in Nepal, as the most significant revolutionary movement in the past twenty or thirty years:


The endemic revolt of the Indian Naxalites could, by getting inspiration from the lessons of the victories [and I would also add "setbacks"] in Nepal, seriously affect the stability of the modes of exploitation in the Indian subcontinent. […] The hostility of India should not be underestimated.  It is one of the reasons for the military cooperation between India and the United States. (Samir Amin, Ending the Crisis of Capitalism or Ending Capitalism?, 98)

The fact that Amin notes "the military cooperation between India and the United States" as yet another reason to protest in the centres of capitalism, just as we protest every imperialist intervention.  And US imperialist interests India are echoed by Canadian and British interests.  And it was our military and our nations' wealth that helped arm and train the Indian counter-insurgency campaign (with torture training provided by hired out Mossad experts), and so we are culpable if we pretend that we have nothing to do with the suppression of revolution.

And yet, whenever I mention these facts to otherwise well-meaning leftist associates, I am often met with bemused expressions, rolled eyes, and the strangest declamations.  We don't know enough about India, that mainstream "marxist" group calls the peasant revolutionaries "terrorists" (but haven't we heard this before and thought it was garbage?), and we don't like them because we're maoists.  All of these are excuses, an abdication of responsibility.

Since when was ignorant an excuse for not getting involved?  It sure as hell hasn't stopped people who knew very little about Egypt and Tunisia to appear en masse to support those brief uprisings.  And years ago, when people used to use the same excuse about Palestine, those of us who were building the seeds of what is now an "acceptable" leftwing movement told these people to educate themselves and scorned the willful ignorance.  Since when have those of us who take anti-imperialism seriously listened to the claims of those who are left in form but right in essence?  Thankfully we excommunicated Christopher Hitchens and his ilk.  And why should the ideological commitments of a revolutionary group prevent us from supporting a rebellion against imperialism?  Obviously I agree with maoism, so my support for the peoples war in India will be a support in more areas than one, but one does not need to support the specific ideology of a rebellion in order to be against imperialist intervention: I supported Hezbollah's fight against the Israeli invasion of Lebanon even though I do not support Hezbollah's political line.

But the situation in India remains needlessly obtuse, this massive and important peoples war ignored, even though a Booker Prize winning author and internationally renowned journalist has been supporting it for around half a decade.  So despite the fact that Arundhati Roy's public support of the Indian maoists has caused her to be threatened with incarceration and garnered her numerous death threats, despite that this movement is being supported by a decidedly non-obscure member of the international intelligentsia, we remain silent.  Her award-winning novel God of Small Things is generally known, but how many of us have read her journalism surrounding the maoist rebellion?  And Roy isn't even committed to the maoist political line, and she has said as much, but she understands the importance of the rebellion in India and supports the right to rebel.  We can do at least this much.

So I'm calling on every comrade who blogs and twitters to demonstrate some form of support for this international campaign during the week of January 14 to January 22.  Write something in support, even if you have to do a little reading, in whatever way you think you can show support.  If you're involved in activism and political organization outside of the internet, find a way to agitate and organize, in whatever way you can, around this campaign.  Hell, even if it comes down to just reblogging some other article supporting the rebellion, even a youtube video of Arundhati Roy speaking on India's CNN in support of the maoist insurgency, that would be awesome.

And if you live somewhere in my region, and possess the means to travel, it would be great if you would consider coming out to the demonstration in Ottawa, on January 21st, to support the peoples war in India.