On Monuments and Moral Panic

The moral panic surrounding "cancel culture" that I discussed in a previous post has blossomed into an outrage over the multiple statues and monuments of racists and slavers that have that have been torn down, defaced, and renamed. And as has been the case with the entire discourse of so-called "cancel culture" this outrage is largely more performative than misplaced. That is, while the explicit justification for this outrage is that the destruction and replacement of these statues/monuments is that "history" is being "cancelled", those making these claims generally do not care about history as something to be rigorously studied. Rather, they are upset that a ruling class conception of history––purely ideological without critical depth––and its concatenation in monumental symbols of power is being challenged. Hence, the claims that a decapitated statue, a renamed building, etc. constitute an attack on history are merely performative claims. Nobody making them actually cares about history; they care about the preservation of the state of affairs and its symbology. But as I wrote in a tweet string responding to one of these outraged "cancel culture" declarations, a rigorous history of monuments must replace monument "history".

The notion that tearing down statues (or renaming buildings) is akin to book burning has been a common category mistake made by those who have been upset by attacks on these monuments. The assumption is that these monuments are essential to historical memory and so to do away with them is to also "rewrite" history. It is in fact not very difficult to demonstrate how this is a category mistake; all we have to do is look at the history of fascist regimes leading up to the Second World War. These regimes suppressed knowledge, even burning books they considered to be "degenerate", but were singularly obsessed with building statues and monuments. In fact, fascist documentaries like Triumph of the Will demonstrate a desire to remake society itself into a monument, bodies into living statues. There was no contradiction, for these regimes, in the suppression of knowledge and history and the construction of monuments. The destruction of the latter was not categorically identical to the construction of the latter, though there was a dialectical relationship of destruction-construction. While knowledge and history deemed "degenerate" was suppressed, and even burned, a reactionary claim to knowledge and history was codified in monumental symbols––akin to what Walter Benjamin called "the aestheticization politics." The fascist monument becomes the stand-in for historical rigour, a symbol of political power that eclipses reason by reducing history to the monument. Such a reduction, this monument "history", is in fact what aids in the rewriting history by making the symbol of the monument––and whatever pithy plaque might be attached to this monument––the standard of historical thought.

Although the Axis fascists might have sought to elevate this aestheticization of politics found in the statue and the monument, it existed long before their manifestation. An entire study of the history of monuments and their use could be written from the moment such monuments existed in human history, and an excavation and evaluation of their symbolic meaning charted. Such monuments might not always exist as negative moments of aestheticization––they might even be established by the oppressed masses seeking to celebrate symbols and figures of their liberation––but they are never identical to historical study and knowledge. They always occupy a symbolic order as the distillation of values; they are a political iconography derived from social-historical struggles. For example, the statues of Augustus, and the monuments built during that period of the Roman Empire, are historical but not history. They existed as ruling class symbols of imperial rule, and the aesthetic order that was the iconography of this rule. Their eventual destruction (and many were destroyed) did not mean that history was being destroyed, only that the symbolic order of a regime's claim to historical ascendance was being destroyed. We know about that period of human history with or without the monuments; we know that the monuments existed so as to make symbolic claims about the permanence of this historical regime. Concrete historical study, however, tells us that the discourse of the monument is impermanent; the law of social-historical motion (class struggle) informs us that all is sacred is profaned, all that is solid melts into air. Whereas pseudo-history seeks monumental permanence, rigorous historical study is iconoclastic. The ruthless criticism of all that exists.

Hence, those who are offended by the assault on these monuments are in fact not interested in history despite their claims that such a concern for history is the reason for their outrage. They are largely dismissive of the historical concerns that lead to such attacks on statues and monuments because the memorialization of these figures form their understanding of history. Take, for example, the recent decapitation of a John A. MacDonald statue in Montreal that was temporarily depicted in a Canada Post stamp, but withdrawn due to outrage from Canadian patriots. The decapitation was motivated by an historical sensibility that MacDonald should not be commemorated because he was a white supremacist who pursued the most pitiless settler-colonial policies so as to establish Canada as a settler-capitalist state. In fact, the decapitation was motivated by historical rigour! Clear out the symbolic regime of historical lies, of statues and monuments that celebrate these lies. And yet those who were offended by the destruction of this monument appealed to history to justify their offense: the destruction of the monument was the destruction of history, akin to book burning! Why? Because their understanding of history was learned through monuments––through stories of great people, of a patriotic Canadian ethos. A profane and concrete history (that is a rigorous history) that demystified the symbolic order of great men they took fore granted, that they were taught to venerate, is as horrendous to them as a decapitated statue. It was not that history was being assaulted, but only their understanding of history––that is, their understanding of history according to common sense notions of settler-capitalism. Such a love of monuments, and the historical perspectives they generally codify, is ultimately a refusal of history.

Another example is the recent moral panic generated by the simple renaming of a building at the University of Edinburgh. Marcus Walker, a member of the Anglican clergy, tweeted his outrage that David Hume had been "cancelled" simply because a building at the university that was once named after Hume was renamed due to the recognition that Hume was a racist. Predictably, his tweet string was filled with the kind of people who believe that "cancel culture" is a real problem facing so-called "Western Civilization" and that the removal of statues or the renaming of buildings constitutes an assault on this notion of civilization. The fact that Aidan McGlynn, a philosopher at the University of Edinburgh, responded to Walker's outrage that his philosophy department had in fact hired two Hume scholars, and that Hume would continue to be taught and researched at the same university, did little to stem the tide of this outrage. In Walker's original string, after all, there were conspiratorial assertions that "the left" actually sought to have books removed from publication or burned. Nobody even noticed the irony of a clergyman expressing outrage over the "cancellation" of David Hume, apparently unaware that the religious right has long sought to have Hume's works suppressed and/or dismissed because of Hume's atheism. After all, Hume would have been more than happy to see the Church of England literally cancelled in his life time. 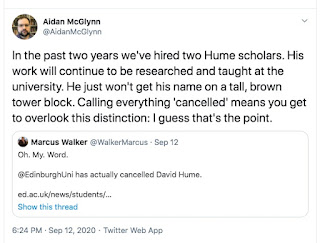 It is thus easy to see how this outrage and moral panic around "cancel culture" is largely performative: those engaging in it do not care about history since they are largely disinterested in studying the history that justifies monument removal, their declarations about the threat of "Western Civilization" are undermined by their refusal to provide a coherent definition of this "Civilization" (note, for example, how the charlatans who wrote a book on cancel culture demonstrably did not understand mathematical and logical debates within mainstream "Western Civilization"), and none of them are really interested in the rational debate they claim is being undermined by "cancel culture" since none of them pay much attention to logical and empirical arguments. Throwing out words like "cancel culture" (or "antifa" for that matter) is the virtue signalling of the right. Ironic since many of these same people also complain that the left are constantly "virtue signalling". But much of the reactionary mind's understanding of everything to the left of it, since it can't be bothered to understand "the left" behind a simplistic and homogenized conception of everything that isn't conservative or right-leaning liberal, is projection. The panic about "political correctness", yesteryear's version of the "cancel culture" discourse that has not gone away, was also a reactionary invention that was simultaneously projection: the fear that another version of political correctness was replacing what reactionaries deemed to be the correct understanding of society. In a world where reactionaries seek to conserve the worst aspects of the past, and annihilate and repress anything that challenges their understanding of reality, perhaps they live in fear of being cancelled and want everyone to imagine that the cancellation of their backwards conception of reality is a cancellation of reality itself. They want reality to be a valley of monuments, of hermitically sealed history that is frozen in time: society, in their view, cannot and should not change––an ahistorical conception of reality, existence as a museum of dusty statues.

Moreover, one has to wonder at the kind of mindset that sees "cancel culture" as a great evil but is not at all concerned about the evils of capitalism, particularly its fascist intensity that is becoming more patently evident in these times of crisis. To spend time complaining about a leftwing conspiracy that wants to vaguely "cancel" (but never really does) anything and everything––even things they don't understand or wouldn't care to understand until they were told to (it's doubtful any of the people complaining about Hume's "cancellation" ever cared to read Hume)––while being okay with, and even justifying, police violence in the wake of the George Floyd execution demonstrates the performativity of this outrage. The fact that the assault on these monuments was a response to the racist violence that these monuments have historically celebrated does not matter to the partisans of (un)cancellation. Monuments are more meaningful than living beings, after all, especially if these beings are placed outside of this imaginary called "Western Civilization". Never mind the fact that "Western Civilization" was constructed upon the wholesale theft of knowledges of those this same civilization colonized and sold into slavery. The statue and the monument deny this history; they stand in the way of it. The performance, then, is about denying history, and denying the everyday violence that proceeds from this history, and instead wanting to conserve dominant power relations.