August 20, 2018
When I heard about Amin's death I was on holiday with sporadic online access. This is what I wanted to write seven days ago…

When I began my PhD I was still an autonomist Marxist who was under the impression that my doctoral work would have something to do with Deleuze and Guattari, whose work had formed a central part of MA dissertation. But I also felt that something was missing, mainly a thorough understanding of Marxist political economy. Hardt and Negri's Empire had just been released and, despite my autonomist Marxist sympathies, I felt that there was something fundamentally wrong with the Empire thesis. I could not explain this wrongness in the language of philosophy, not without a proper understanding of political economy, so I knew that I needed to develop my understanding of Marxist economics. Naturally I dove into Capital but, because I felt I needed a contemporary political economist to help with this exploration, I picked up some books by Samir Amin. 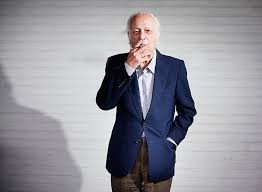 My choice of Amin wasn't arbitrary but connected to my current state of ideological development. Deleuze and Guattari had referred to him favourably in Anti-Oedipus. "As Samir Amin has shown," they wrote, "the process of deterritorialization here goes from the center to the periphery, that is, from the developed countries to the underdeveloped countries, which do not constitute a separate world, but rather an essential component of the world-wide capitalist machine." (231) The fact that Hardt and Negri had declared Amin's Leninist conceptualization of imperialism erroneous while simultaneously relying on Deleuze and Guattari's notion of "deterritorialization" rendered the latter's lionization of Amin ironic and thus compelling.

(Years later, when my political perspective was quite different, I wrote and submitted a paper for a special issue of Deleuze Studies that attempted to explore this compelling irony. Unfortunately, the paper was rejected. I would discover later that one of the peer reviewers blocked it because it was too Maoist––he used the word "yuck" in his peer review to describe Maoism––and because my rejection of Hardt and Negri's Empire thesis failed to take Thomas Friedman's The World Is Flat seriously! So much for the vaunted authority of peer review. But if anyone is interested in reading the draft of that paper, you can download it here.)

The first books I picked up by Amin were ones that were contemporary at the time: The Liberal Virus, The Obsolescence of Capitalism, and Spectres of Capitalism. These were useful interventions that allowed me to understand what a concrete intervention upon a concrete situation looked like, but they felt like they were dependent on his previous work. And so I spent the first two years of my PhD chasing down Amin's classic oeuvre on the side of my own doctoral work. Using Academic Book Exchange I got ahold of Accumulation on a World Scale, Unequal Development, Class and Nation, Eurocentrism, and other out of print texts, while finishing off the three volumes of Capital and other classic works of Marx and Engels.

In the process of consuming Amin I was forced to make detours into the works of Lenin and Mao. Early Amin was quite clear that his theorization of the political economy of imperialism was a development of Lenin's theory of imperialism and thus I needed to read Lenin to make sense of what Amin was developing. It was also clear, in the early works, that his development of Leninism was based on an anti-revisionist understanding of Marxism-Leninism that was influenced by the Chinese revolution. In Class and Nation (which is still my favourite of Amin's books) he would write that the best of Marx's successors were "Lenin and Mao" and that "for a rigid dogmatist, what could be more heterodox than the contributions of Leninism and Maoism to Marxism?" (206) Indeed, my study of Amin pushed me towards Maoism. By the time I encountered Maoists connected to struggles and People's Wars abroad, not to mention the burgeoning PCR-RCP in Canada, I had already been pushed in that direction by Amin. His work, especially his early work, cured me from autonomism and cold war ideology.

Having read so much of his work I was able to write a summary of his contribution to social theory in The Avenel Companion to Social Theory as well as an authoritative review of the second edition of Eurocentrism. But at the same time it was becoming clear to me that Amin's later work was either a rehashing of his earlier work or a modern and movementist distortion. Despite the fact that he refused to denounce communism, and maintained the course against the so-called "end of history", he also witnessed the failure of multiple movements and was getting old. Sometimes he made declarations that were quite disappointing. But, let's be honest, there aren't many radical political economists who have contributed so much and stayed the course outside of the mass movement.

I had hoped that Amin would still be around to contact as a reviewer for one of my unpublished works but now he's gone. That's it, he's gone: this unrepentant Marxist political economist who provided so much to the movement. And the same poor assessments of his work that grouped him in with "neo-Marxism" and "world systems theory", pretending that he was some second order theorist, linger in his obituaries, forgetting that he was not part of these trends but the originator that they borrowed from. Forgetting that the only viable theory of transition was developed by Amin, and that this theory was connected to his pain-staking working out of Lenin's theory of imperialism. All political economies of imperialism and transition must now begin with Amin's classic works as their starting point or end up in the swamp of revisionism.