Line Struggle in the PCR-RCP

March 13, 2017
One of the reasons I was drawn to Maoism was because of its conceptualization of the imperfect party. That is, rather than seeing the party as a top down monolith that enforces perfect discipline, Maoism recognizes the importance of line struggle, endorses the messiness that this brings, and sees such struggle as a way to renew the party formation. Of course, being aware of this conception of the party and experiencing it are two different things. Hence my sadness upon discovering that the Maoist organization I support, and that is growing across Canada, has now entered a stage of acute line struggle.

Since I have written about the importance of line struggle as key to an understanding of the Maoist Party of the New Type (in Continuity and Rupture and elsewhere) I of course don't see the PCR-RCP's recent entrance into a stage of acute line struggle as undermining Maoism. Rather, it confirms what we Maoists have always said: line struggle is inescapable since we bring all of the class conflicts into the party. Moreover, when an organization experiences significant growth it will most probably experience line struggle as growing pains. If your organization is not confronting these struggles then it has probably suppressed them (and thus will deal with them in more negative ways at a later date) or is not growing––if you're just a group of fifteen friends then your possibility of encountering such problems is much lower than if you have extended the sphere of your ideological influence country-wide. 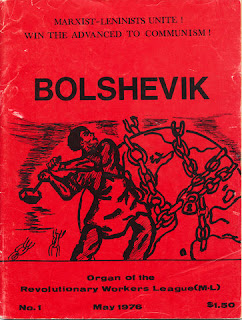 Recently on the official PCR-RCP website the Montreal branch of the organization released a statement condemning the Central Committee's expulsion of four comrades, stated that it overturned this decision, and then a variety of claims about anti-party cliques, preserving Maoism, and line struggle in general. Since news about the expulsion in question wasn't published, and since the Montreal branch seems to have taken over the website to prevent such news, it also appears that this branch has decided the party leadership (which is meant to represent the countrywide organization as a whole) is illegitimate. Moreover, the statement is somewhat confusing for outsiders since it is vague on the details and, in what appears to be a rejection of Democratic Centralism, forbids the CC expulsion statement from recognition.

Despite being forbidden from its own website, though, the Central Committee has issued a series of documents elsewhere: a statement about being locked out of the PCR-RCP website, a repost of Montreal's claims, and what was meant to be the initial CC statement regarding expulsion. Although I want to recognize that line struggle is such that the statements of both lines need to be taken seriously, and that the organization should think through the collision so as to come to principled unity through the struggle, I feel it is worth noting that the Central Committee was locked out of the organizational website by Montreal and that the Montreal statement did not even allow the CC statement to circulate.

But I was there when the acuteness of this line struggle was precipitated and, until now, I have held off saying anything out of respect for organizational boundaries. Since this is all out in the open, though, I feel it is within my right to draft some kind of intervention. During my book launch at Maison Norman Bethune (MNB), which I love and see as a home away from home, four supporters of the PCR-RCP stormed into the talk and physically assaulted three members they had classified as anti-party elements. The launch and discussion was ended prematurely because of this event; I left with three individuals that were not invested in the organization, all of whom were disgusted by the physical altercation.

Before all of this happened I entered MNB with the three members who were assaulted. Some of the people there approached me to ask that these members leave, since they were seen as "anti-party" elements, and I replied that: i) it was a public event so in my opinion anyone could attend; ii) if there was a problem then it was not my place to ask these people to leave but the place of those demanding I make such an intervention. There was an agreement that I speak with them and ask them to not criticize the PCR-RCP publicly, to which they agreed. As a Maoist I happen to believe that there's no reason to fear criticisms of "anti-party"elements, that such criticisms can be roundly denounced if they are ever raised, and that we have more to gain in responding to such bullshit in a principled manner than trying to repress it. But the same people who agreed to this compromise did not seem to mind the fact that, in the midst of the book launch, the assault and the disruption took place. When the three targeted individuals were ejected I left as well, in the company of people who were not connected to the PCR-RCP (and were disgusted by what had transpired), because I felt that the integrity of the event had been severely compromised.

The statement of the Montreal faction that rejects (and has locked out) the decision of the Central Committee does not even recognize that the assault during the book launch should be condemned. Whereas the CC condemns this member-on-member violence to the point of recommending expulsion (a decision that I will not comment on here), the Montreal faction does not even comment on this problem. In fact, it represents the CC as a "clique" (ironic since Montreal is claiming that party leadership is more cliquish than a single city which by definition is a "clique') for condemning the behaviour of this event, and then launches into invectives about preserving Maoism. But the Central Committee statement is focused primarily on the fact of a public assault and not all of the supposed claims that the Montreal statement presumes.

To be clear, and what makes this entire post very difficult, I am not denying the importance of multiple Montreal comrades in the establishment of the only Maoist project that matters for Canada. I'm even going to go further: I think some of the points they bring up in their aforelinked statement are necessary to consider for this line struggle. I have learned Maoism from some of these comrades; I will continue to learn more from their experience. I feel entirely saddened by the fact that they have chosen to negate Democratic Centralism so as to valorize an historic leadership that doesn't seem to care about the development of the organization outside of Québec. And despite this sadness I still feel, no matter what, that many of these comrades remain my mentors. Even still: what the fuck? Let's resolve this line struggle in a principled manner. Let's be Maoists.