July 27, 2016
I'm finally reading my doctoral supervisor's seminal work on Antonio Gramsci: Gramsci's Historicism by Esteve Morera. Originally published in 1990 but rereleased in 2011 as a "Routledge Revival", Gramsci's Historicism was influential for a whole generation of Gramsci scholars (many of whom are now seen as Gramsci "authorities") who broke from post-modern and post-colonial appropriation of Gramsci in order to return to this thinker's Marxist roots. 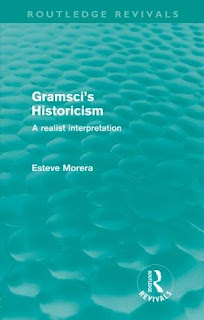 Although my doctoral work was not on Gramsci (it was a philosophical engagement with anticolonial theory in the present conjuncture of ongoing settler-colonialism), Morera was the departmental Marxist who was happy to work with anyone doing radical philosophical work in this tradition. Since his brilliance was quiet and humble, he never tried to force his own work on me, or demand that I put more Gramsci in my project, but instead encouraged my thought in an organic manner. [My second reader, Lorraine Code, did the same despite being one of academia's foremost feminist epistemologists.] But now that I'm finally reading his foundational book on Gramsci (to be clear, I did read some of Morera's essays and articles), which has been sitting on my shelf for a couple of years, I'm discovering that his Gramscian approach to various problematics influenced me more than I realized… but I digress, I'll discuss this in more detail below.

Despite the fact that my dissertation was not a philosophical engagement with Gramsci, I still studied Gramsci with Morera in an independent reading course during the second year of my doctorate. This was a few years before the Quaderni were available in English and all that existed, aside from The Modern Prince and other pre-fascist Italy articles, was the International Publishers' thematically edited Selections From The Prison Notebooks. Morera had me read the entirety of the Selections in a single semester but in an order he curated––in fact, I didn't realize I read all of the collection until the end of the course when I looked back on my book and discovered every single page was heavily underlined and annotated. When our discussion of the material approached confusion Morera would crack a well-read copy of the Italian Quaderni and quickly locate the context of the translated passage for further illumination. Being a quintessential expert on Gramsci, he knew the material almost by memory in the original Italian (how many people who study Gramsci today can say the same?) and was also invested in thinking through multiple interpretations, and seeking unity, of text that was never able to achieve proper coherence.

My drift towards Maoism crystallized in this independent study of Gramsci. When I started the independent course I was still some sort of autonomist marxist (though I was beginning to realize the limits of this thought), but because I happened to be reading some Lenin and Mao at the time for the sake of intellectual history I realized that there was something in Mao that dovetailed with Morera's interpretation of Gramsci. And though Morera was not a Maoist (mainly because he had never studied anything within the Maoist tradition) he encouraged me to write my main course essay (which I cannot find, lost on an old desktop computer probably) on the intersection of Gramsci and Mao. The very act of writing this essay annihilated the last vestiges of my autonomism, clarifying the necessity to understand Marxism in a way that I once thought was "orthodox" but suddenly, in the context of studying Gramsci with Morera, felt entirely new and heterodox.

Aside from all the other work Morera did to make my dissertation project defensible, one thing that I immediately recall is his attention to the clarity of the concept: make your concepts clear, the names you use clarified conceptually, and pay attention to structure. The last concern was possibly due to his work on a thinker who died before he could properly structure his work. But these other concerns––concepts and names––were also indebted to the same thinker. Indeed, the significance I have placed on the significance of name and concept in my two books is inherited from Morera's Gramscianism, something I encountered in the opening passages of Gramsci's Historicism. "Gramsci asserts that words are often used in a metaphorical sense, metaphorical because, although the word is the same, the concept is not: 'Often when a new conception of the world follows a preceding one, former language continues to be used, although it is precisely used only in a metaphorical sense.' […] [T]oday's language 'is metaphorical with respect to the meaning and ideological content that words have had in preceding periods of civilization'." (4-5) While it is true that the significance of name and concept possesses a long philosophical tradition, the way in which this significance is taken up by Gramsci, and highlighted by Morera, is foundational to aspects of my own approach. Add to this the problematic of economism/voluntarism that Morera takes up in his analysis of Gramsci's historicism, along with a rejection of the speculative metaphysics of "immanence" and "transcendence", and the entire gamut of my philosophical work post-PhD demonstrates that it was influenced by this unassuming Gramscian scholar.

Now that my blog has just passed the two million point, surprising me by the amount of readers who are interested in what I produce, I feel that it's worth mentioning the people who influenced me right before MLM Mayhem was hatched, and continued to influence me for several years during its hatching so as to impress their theoretical discipline upon my philosophical practice. Esteve Morera, being a lovely human being, wrote an equally lovely endorsement for my upcoming book. I hope that he realized, when he read and thought of his endorsement, that so much of this book was indebted to his pedagogical intervention. And now that I'm finally reading his influential work on Gramsci (which I hope to review here when I finish) I'm also hoping that I can find something useful for other projects, especially those connected to conceptualizing socialist hegemony.