August 18, 2015
This is going to be the first in a series (though not sequential, and will probably happen slowly between other posts) of posts where I reflect on Jasbir K. Puar's Terrorist Assemblages: Homonationalism in Queer Times as I read it.  Less of a review and more of an impressionistic reading, this series is inspired by the "Let's Read" series' on the ronanwills blog where the author would read popular fantasy/sci-fi books and reflect, often quite hilariously, on each chapter.  When I first read some of these posts I thought to myself, "I should do something similar with a work of popular theory."  I was pretty sure, however, that it would not be as funny…

In any case, I finally decided to try this format out with Terrorist Assemblages.  Over five years ago I picked up Puar's book because I knew it would be important; I guessed some of its concepts and subject matter would eventually become standard within radical theory circles, and though I was correct I ended up relegating it to the pile of "need-to-finish" books after reading just over one hundred pages.  There were a number of reasons why it ended up moving down in priority, most of these being other books that were directly related to what I was working on at the time.  When I was writing my critique of the nihilist turn in radical theory, however, I fished it off my shelf to look up some information and recalled that I still had a little over half to complete.  Since I could barely recall what I had read five years ago, aside from a vague outline, I decided it was best to start from the beginning––breeze through the 100 pages I had already marked up (since underlining and annotating takes up twice the reading time) until I reached those pages yet to suffer from the wrath of my pen (which is often quite wrathful due to the fact that I try to underline and annotate on buses and subways).  And since, months and months ago, there was this internet eclectic-revisionist-chauvinist-tanky-pseudoTWist marxist who cited Puar in a meandering attack on some post I wrote in order to justify his homophobia (which I could tell, from the 50% of Puar's book I had read, but only foggily remembered, was an insulting appropriation of her intellectual labour), it's all the more appropriate that I try my first (and hopefully not last) "Let's Read" series with her. 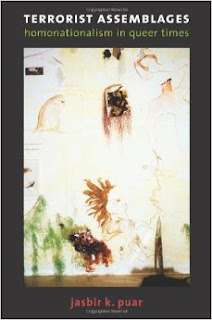 My first impression of Puar's Terrorist Assemblages is that it is going to be a frustrating read. Although it seems to excavate important territory (i.e. the way that queerness has been, one the one hand, appropriated by the imperialist camp for the war on terror and, on the other hand, displaced to terrorist bodies), and promises important theoretical concepts, so far it seems to be entrenched in the kind of smorgasbord approach to theory I've complained about before.  That is, instead of providing a rigorous interrogation of the concrete and material factors of a social phenomenon upon which to build a theoretical development (which is, at least to my mind, the very strength of the historical materialist approach), it instead becomes waylaid in academic eclecticism.  Post-Deleuze this kind of approach has often been justified as "rhizomatic" or "rhizomic", and it is telling that those academics who do fall back upon this potpourri variant of theorizing usually end up using the same rogues gallery of "post-" theorists (i.e. Foucault, Butler, Agamben, Said, etc.) who, despite my problems with them, were still more rigorous than their disciples.  This kind of theory-for-the-sake-of-theory approach, where new concepts are generated just for the hell of it and chic post-structuralist theorists are plugged in here and there in a manner that seems to be an appeal to authority, is one of my problems with, for example, much of the Semiotext(e) "interventions" series, such as Tiqqun or Lazzarato.  Puar appears to be doing the same thing but with a more apparent US academic sensibility.

Puar begins the Preface by talking about the 2006 International Day of Action against Homophobic Persecution in Iran (led by OutRage! and IDAHO) as an avenue for talking about the ways in which a particular, and now hegemonic, first world queer discourse is complicit with orientalist ideology. In doing so she points out the telling distance between these organizations' (both of which function at the imperialist metropoles) critique of human rights abuses in Iran, particularly the supposed "juvenile execution" of queer persons, and non-critique of the fact that "the United States continues to resist a growing consensus that capital punishment is inhumane, having only just recently outlawed executions of those under 18 in March 2005." (xi) So far, so good: I get the impression that this distance, where the US blames its terrorist other for precisely what it also practices, will be one of this book's themes.

Pointing out how this 2006 event coincided with the Bush administration's claim that Iran was a member of the "axis of evil", and how those involved had nothing to say about the violence visited upon the declared enemies of the War on Terror, Puar declares: "[a]t this historical moment, this bizarre conjuncture functions as nothing less than the racism of the global gay left and the wholesale acceptance of the Islamophobic rhetoric that fuels the war on terror and the political forces pushing for an Iranian invasion, if not a tacit acceptance of the pending occupation itself." (xi)  Maybe so, but I immediately begin to wonder about the way terminology is being deployed: to assert that it is "the global gay left" that is accepting Islamophobic rhetoric is to also assert, without any explanation or definition, what constitutes this "gay left" in the first place.  Liberals (and the few reactionaries) who are queer are clearly pushing this position, but this is not a "gay left" because, at least to my mind, what we would define as a "left" would have to have some kind of revolutionary and anti-liberal politics.  This slippage in the conceptual terrain is somewhat bothersome and I worry that worse slippages will happen in later pages.

I'm more interested, though, in Puar's tantalizing claims about the "folding of queer and other sexual national subjects into the biopolitical management of life" that is in tension with "the simultaneous folding out of life, out toward death of queerly racialized 'terrorist populations'." (xii) I think, from what I recall of my past unfinished reading, that this is going to be a significant tension.  I'm interested, and a little concerned, as to how she will pull it off.  While it does indeed seem to be the case that there is a "homonationalism" at the centres of imperialism where privileged queer people are "folded" into national subjects, the claim that terrorists are "queerly racialized" seems to be something of a conjecture.  The fact that the most dedicated and outspoken reactionaries use homophobic language to describe the enemies of the US is not necessarily proof that terrorists are being especially "queered"––if this was the case, then anyone your average white supremacist homophobe hated would also be queered, which seems to undermine the meaning of the term.  But we'll see.

Which brings me to Puar's defense of her theoretical eclecticism by simply deeming it queer theory: "a queer philosophical methodology… challenges a linear mode of conduction and transmission: there is no exact recipe for a queer endeavor, no a priori system that taxonomizes the linkages, disruptions, and contradictions into a tiny vessel." (xv) As a philosopher this bothers me immediately, particularly since it claims that there can be a philosophical methodology that lacks rigour (and celebrates this lack of rigour) justified as queer––this seems like a complete rejection of what philosophy means, a discipline that was always intended to provide clarity, and conflate it with random theorizing.  More to the point it reads as an excuse for eclecticism and an excuse to not be coherent: I'm not going to try to provide a concrete analysis of a concrete situation because that would be not-queer.

What is troublesome about this conflation of queerness and theory (which, I recognize, preceded Puar and is a larger problematic) is that it appears to define queerness not as sex/gender position that disrupts actual heterosexual normativity but as a vague metaphor that is about being eclectic and unrigorous: what might happen, here, is a displacement of queerness to the realm of academic play (where academics who are otherwise heterosexual can call themselves "queer" because they are being theoretically eclectic), ignoring the way it functions as a concrete identity position, and opening the doors for anyone who is the worst kind of eclectic, hodge-podge thinker to define themselves as queer.  So if I decided to buck rigour and embrace eclecticism would I also be a "queer theorist"? Considering that I am otherwise quite heteronormative, and have thus never faced the kind of oppression a queer individual experiences outside of this theoretical realm, to claim such a thing seems kind of insulting.  Moreover, MRAs are also eclectic and unrigorous: are they therefore using "a queer philosophical methodology" that is intrinsically transgressive?  And then thereis the poor use of "a priori": all scientific disciplines, according to this analysis, are wrong because they have preestablished categories… The problem with the a priori is not that it means "preestablished categories" but that it was an idealist approach to reality where thought was said to precede the material world––let's at least understand its original meaning. More to the point, presupposing theoretical eclecticism would also, according to this poor definition of the a priori, be a form of apriorism.

Let's skip ahead.  There is a lot in the Preface that is simply a summary of what will be discussed later but, at this point, feels entirely idealist (and hence, I'm afraid, a priori).  Like the assumptions conjectures about how terrorism is queered, or the vague comments about temporality.  These feel more like preface-style seductions to draw the reader in, all of which will be thoroughly examined in later chapters.  The Preface does occupy a tenuous place in a book that also has an introduction.  Good lord, that's the entire problem with these academic books: they have multiple introductions that you have to wade through before getting to the chapters.  Twenty-eight pages of Preface (roman numeraled to keep separate) and thirty-six pages of Introduction.  So sixty-four pages before we hit the guts of the book.

And then there's this strange moment on page xxv where Puar refers to Slavoj Zizek as a "feminist and queer theorist." Considering that Zizek is, in many ways, the epitome of hetero-masculine academia this is kind of funny.  Can anyone be a queer theorist if another queer theorist says so?

I get the feeling that, like so many other works of academic theory, things will be written in such a way to take more time to get to the point than is necessary.  I'm only saying this because this is the kind of shit that everyone ever who has written a doctoral dissertation was forced to do: over-bloat the content.  And at this point I feel like I'm reading a dissertation: I should have expected this because Terrorist Assemblages is published by a university press.  Lots of lit review, but that's what the medium requires!  So let's move on to the Introduction since the rest of the Preface is expended in explaining what each chapter will argue.