On Some Questions Regarding *The Communist Necessity* [more shameless promotion]

August 12, 2014
Due to various comments and emails raised by my previous posts about my soon-to-be-released book––and because I want to keep using this blog to plug my book in the days leading up to the first launch––I've decided that it is worth responding in detail to some of the questions here rather than just redirecting people to the documents that will answer them more thoroughly.  Although some of the comments I've been receiving are trollish and unprincipled (I don't see what is so amusing about people trying to associate me with the Avakianites and ask random RCP-USA questions, what political or even humorous point such "interventions" produce when I end up deleting most of these vacuous claims), there have been a few that are honest inquiries that, if answered directly and simply, might result in more book sales and a higher attendance at the launch. 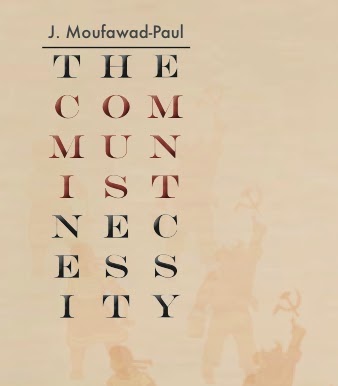 1) Is The Communist Necessity a collection, or a cut-and-paste exercise, of entries from MLM Mayhem?

No, it is neither a collection of previous posts nor a cutting-and-pasting of multiple posts.  Although it is an expansion of a 15 page document of the same name that I offered on this blog over a year ago, and this document (though having gone through several edits) forms part of the first chapter and part of the last chapter, it is a book in its own right.  That is, after having hastily written that paper, I realized that the problematic it was investigating required a far larger engagement and so I began to slowly turn it into a small book that is around the same size as some of the literature it was critiquing and is less vague.

Of course, I cannot deny the fact that there are concepts and theoretical positions that, being commonplace to the blog and my theoretical work in general, will reappear in the book over and over.  Sometimes the phrasing might even echo things I've written here and there on this blog, but that's no different than when one entry unintentionally echoes a previous one: these things sit in my head, reinforced through discussions and successive writing, that they cannot help being repeated in whatever I write.  However, since this is an organized book and not a scattered collection of reflections, there was never any direct cutting-and-pasting or an attempt to force a punch of different entries into the framework of this project.  So it's an entirely original book, not a composite of previously released material (aside from the essay mentioned above), but one that reflects many of this blog's long-standing concerns.


2) Is The Communist Necessity overly academic?

No.  While it is true that I am an academic and my training will result, despite my best attempts, in an academic-influenced jargon and approach, I have done the best I can to make this book accessible to a larger audience.  At the same time, due to the complexity of some of the things I'm discussing, I cannot avoid the use of a certain rarified conceptual language.  Such a language, though, is closer to a traditional communist language and jargon constellation––terms drawn on by revolutionary organizations for years––than academese.

Moreover, since the book is aimed at a problematic that is familiar with people in North American activist circles––and also people who are marginally familiar with popular marxist approaches to organizing––it might still be opaque to someone completely unaware of communist theory and organizational experience.  That is, it is a specific intervention on an area that must be accepted from the get-go as worthwhile: it is aimed at us leftists and is not primarily a book that will convince someone that communist theory is correct.  Like any book, it begins by accepting a certain set of boundaries.


3)  Does The Communist Necessity explain your understanding of Marxism-Leninism-Maoism?

Not really, no.  While my MLM positionality is implicit in this book, and many historical examples I use are from MLM revolutionary movements, it is not an explicit engagement with the "scientific" nature of MLM, what makes Maoism different from Mao Zedong Thought, the problematic of continuity-rupture, or any other of the specific philosophical concerns about the meaning of MLM that I have discussed, here and there, on this blog and elsewhere.

None of this is to say that the book isn't haunted by these concerns, or that they don't appear here and there as side comments.  Since it is written from an MLM perspective, it is going to be guided by these concerns and a Maoist way of seeing things, but it is not concerned with directly arguing why MLM is the "correct" theoretical tendency.  Rather, it is an engagement with the problem of [social] movementism, a long-standing concern on this blog, the new articulations of "communism" that are appearing, and the importance of creatively returning to communism that can actually be revolutionary, that treats making communism as a necessity.

I do have a draft manuscript that is directly concerned with the meaning of MLM, but it is more academic, much longer, and even after it is edited (let alone finding a publisher) will probably be less fun to read than The Communist Necessity.  My hope is that the success of The Communist Necessity will lead to future publications, particularly of this kind, so I'm counting on all of you readers to help make this a reality.


4) Will there be a Toronto book launch?

Yes, in either September or October based on the general activist calendar in Toronto.  I'm just now looking into viable venues––whether I have it at a bar, cafe, or my partner's gallery space in a period between installations is still being decided.  It will be supported by the Proletarian Revolutionary Action Committee and maybe some other groups, after some logistic details are worked out.

There will also be a Montreal book launch at Maison Norman Bethune, but they're also working out the details, and there might even be launches in Hamilton and elsewhere.  As soon as I know these details I will post them.  If you're part of an organization that is interested in hosting a launch in your own city––if you end up buying a copy of the book when it is released in a week or so and want to have an event where the issues raised in it are discussed––then just let me know.  I'm amenable to touring, as long as I can afford it.