On the Upcoming Provincial Electoral Circus

June 03, 2014
The Ontario elections are upon us again and the electoral circus has reached the point of self-satire.  Now the New Democratic Party [NDP] has stopped pretending that it represents even the most privileged sector of the working-class and has instead adopted a right populism in a jaded attempt to steal votes from the conservatives.  The logic of the economic crisis, that has succeeded in pushing all parties further to the right, has permitted the party that once pretended to represent the working-classes to outpace the Liberals in this rightward drift.  Hell, the NDP representative just one riding over from mine is an unabashed zionist who is proud of her service to right-wing Ukrainians in getting the "Holodomor" recognized as a genocide––a very timely candidate, to be sure, since the fascists now in power in Ukraine are the ones most responsible for pushing this ideology.

Back during the days of the PCR-RCP initiated second Canadian Revolutionary Conference [CRC], those of us who began working on an electoral boycott campaign were seen as being out-of-step with leftist good taste.  The charge of "ultra-leftism" was tossed about, as it always is by opportunists, and the line of demarcation we were attempting to draw was treated as heinous.  Since then we not only discovered that others were sympathetic to this line (indeed, this campaign provided us with the basis to grow into a far more significant set of organizations) but that everything we were claiming about the rightward drift of every bourgeois party was accurate.  The line we drew then no longer seems illogical; it is becoming easier, even amongst the left still desperate to believe in the safe space of electoral social democracy, to demonstrate that there is no bourgeois party worth supporting––that the most exploited and thus revolutionary factions of the working-class will lose no matter what party wins in the upcoming weeks. 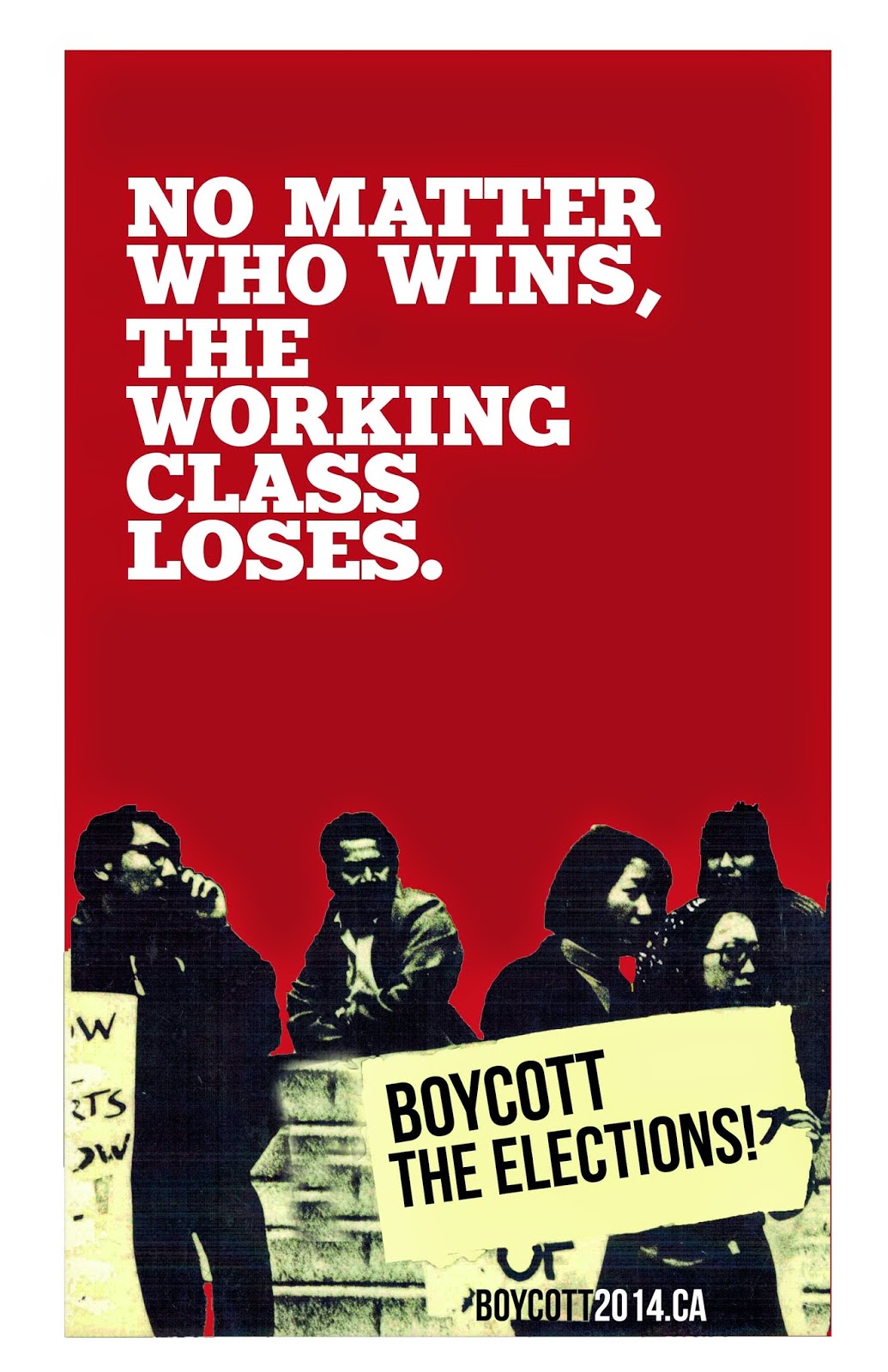 The last Ontario election proved the existence of a constitutional crisis.  Only 49.2% of registered voters participated in that farce, meaning that the provincial government was recognized by a minority of the population.  If the majority of registered voters (to say nothing of unregistered voters, which includes a vast variety of undocumented workers, the backbone of this economy) did not even recognize the last government, then its legitimacy should be called into question.  The claims we made in 2011 about an implicit boycott were again proven in this moment; an actual democratic decision was clear––a rejection, whether or not it came from a position of "apathy", of the dictatorship of the bourgeoisie.  An organizational potential, a possibility to systematize disaffection by giving it political direction.

None of this is to say that the habit of supporting the NDP is not easily kicked.  Like a bad addiction, those who should know better are capable of generating multiple excuses for using.  Convinced that this now rightist party is still secretly left they argue that its strategy is to split the right-wing, forgetting that this election only exists because it sided with the right in the first place.  The NDP must still represent the working-class, is the argument, because that is what it is––a working-class party!  Forget, then, that it has only represented the most elite factions of this working class for the past two decades, forget that it has even sold out even the labour aristocracy when it has had the chance, and forget its pro-imperialist ideology.  A secret socialist plan, then, so secret that it persists despite voting even the word socialism out of its constitution.  A working-class party that only labour aristocrats and petty-bourgeois champagne socialists recognize as "working-class"––a party for the pseudo-leftist elite.  The myth of Jack Layton will help them along.

Anyone who buys this pro-NDP discourse, even for the most callous entryist reasons, should just admit that they are liberal ideologues rather than abiding by this stale charade.  If you have to bend over backwards to pretend that some right-liberal ideology is secretly social democracy––and that some party that represents only the elite sectors of the working-class is a proletarian party––then you really are living in an imaginary world.  We drew those lines in 2011, you should step over them now before losing the last shreds of your leftist sanity.

Then, of course, there are those old revisionist communist groupings whose primary strategy consists of running candidates in the elections.  The Communist Party of Canada apparently still believes in a peaceful transition to communism based on its practices, its focus on electoral politics, and its Bernsteinian hatred of everything even marginally militant.  As noted elsewhere, the opportunist tends to think of everything revolutionary as "ultra-left", just as Bernstein and Kautsky thought that Lenin and the Bolsheviks were ultra-leftists, and in this case being "ultra-left" means not participating in the elections.  No surprise that the CPC's discourse, aside from using the name communism, is affected by the same rightward drift that has caused the NDP to become more right than the Liberal Party.  Perhaps the CPC will drop all of its baseless communist jargon and just accept its a social democratic party: if you care about the elections, then you probably would want to fill the void abandoned by the NDP.

Thus, in preparation for a massive cross-Canada boycott campaign, revolutionary forces throughout Ontario have launched a provincial boycott.  This time the boycott is being carried out in more than a couple Ontario cities: Peterborough, Thunder Bay, Sudbury, Kitchener-Waterloo, Guelph, Ottawa, London, and Toronto.  The hope, as with before, is that this will be a useful organizing campaign to pull more of the masses towards a revolutionary communist movement.

(If anyone in the Toronto region is interested in participating in the last two weeks of the boycott, there will be a public forum at the end of this week.)