April 02, 2014
As some of my readers may know, the 3rd Canadian Revolutionary Congress [CRC] will soon take place in Vancouver.  Seeing as how the 2nd CRC held in Toronto was a formative political experience for me, I hope that those who have an opportunity to attend the third CRC will have a similar experience.  For those readers who are interested in this event, I have decided to post links to documents that may confirm your desire to attend. 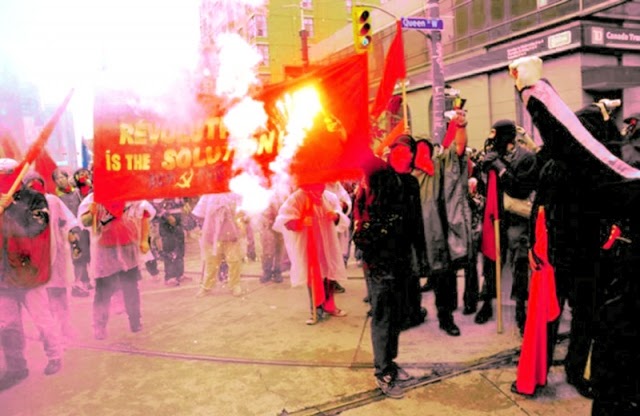 Of course, it is best if I start with a link to the congress call-out, A Call for Revolutionary Unity.  The aim of the congress, as well as the contact information, is available in this call-out.   For background reading it is worth taking a look at the position paper that came out of the 2nd CRC, The Proletarian Movement We Need, which led almost immediately to the emergence of PCR-RCP connected organizations in Ottawa and Toronto.

Since an RSM chapter recently appeared in Vancouver, its members will doubtlessly be mobilizing for the 3rd CRC.  With this in mind, it is worth reading the MER-RSM's critique of the Young Communist League [YCL] and its own recent congress.  The critique is useful in demonstrating what principled line struggle looks like, particularly since it takes the time to go over the YCL documents (which make not-so-subtle and disparaging references to the RSM), and draw important lines between opportunistic and revolutionary organizing.

Aside from ironic references to the YCL's complaint that the MER-RSM should not exist because it is a separate group despite the fact that the YCL is itself a separate group ("we are left to conclude… that according to the YCL's Central Committee, the YCL alone has the right to exist"), the most interesting passages in the latter document are the statements regarding how to use reforms in a revolutionary manner:

"What is the role of the struggle for reforms in the broader revolutionary struggle, according to the MER-RSM? Let us start from the assumption that our goal is communism, and the conditions in which we are working are conditions as they currently exist; that is to say, we have abstract goals (communism) and concrete conditions (reality) as the two poles which must be mediated. Our job is to figure out how to get communism from here: how to turn concrete conditions into our abstract goal. Being Marxists, we understand that the motor-force of this process is class struggle. Thus, any action that is taken should be evaluated on the basis of whether or not that action advances class struggle, or, whether or not it concretely advances concrete conditions towards the abstract goal of communism. Specific reforms that are fought for need to be subordinated––and consciously and openly subordinated––to this broader revolutionary process. Fighting for reforms as part of the broader revolutionary struggle, and having the fight for reforms subordinated to the goal of revolution, is the true unity of revolution and reform."

Unfortunately, it is doubtful that the YCL will respond to this critique anytime soon.  As some of my readers are probably aware, the YCL is the youth group of the Communist Party of Canada [CPC] and the CPC has been a revisionist party for a very long time, little more than an electoral project.  While it has been marginal in the past several decades in the student movement (no less marginal, to be fair, than the majority of communist student organizations), it often has an inflated sense of importance.

In any case, some of the problems addressed in this document, though focused on the student movement in particular, connect to the general problematics that will be addressed in the upcoming conference.

As many of my long-time readers know, one of the reasons I was drawn to the PCR-RCP was because it was the first communist organization in Canada, organizing as a party, that treated decolonization as a serious issue.  Not in the fashionable "decolonial" manner, where almost fetishistic appeals to the culture of colonized nations are treated as revolutionary, but in revolutionary and materialist manner premised on national self-determination.  Although it is the case that there are various communist-identified organizations that take indigenous "rights" seriously (i.e. the New Socialist Group, among others), they have rarely articulated a line on revolutionary anti-colonial struggle, particularly since they tend to be more focused on Quebec Sovereignty as the national question in Canada.

Hence, I enjoyed a document that was written particularly for the 3rd CRC entitled The Struggle for National Liberation of Indigenous Peoples is Central to the Revolution, which discusses the importance of decolonization and national self-determination as a fundamental aspect of any revolutionary movement in Canada.  In this small document, indigenous self-determination is treated as a central aspect to any strategic theorization of people's war, fundamental to a revolutionary movement in Canada.  There are also some nice off-hand remarks about the failure of the communist movement in the past to take this seriously, the obsession with Quebecois nationalism, and social-chauvinism in general.

Recently a translation of an old Action Socialiste article, The Communist Party Must Lead the Revolutionary War in the Imperialist Countries, has been made available.  For those who might not be aware, Action Socialiste was one of the organizations that would unite to become the PCR-RCP; this article was from its newspaper, Socialisme Maintenant!, in January 2000.  The significance of this document is that it is the template for the line on Protracted People's War that the PCR-RCP would adopt at its founding congress.  Although later articles published in Arsenal would expand on the understanding of PPW expressed in this older document, it is still worth reading since it provides some background to the people's war position that might not be evident in official party documents.

My favourite passage in this document is: "How, then, can we accept that in the advanced capitalist countries the question of the proletarian revolution, i.e. the strategic line of the revolution, has become the most underdeveloped area of Marxism-Leninism? Its least creative zone, the least productive?"

Examining some statements about Engels regarding the necessity of a military strategy that is proletarian (statements echoed by Karl Liebknecht in his book Militarism), as well as the general problem of opportunism at the centres of capitalism, this article's demand for developing a revolutionary strategy particular to the centres of capitalism was largely influential in the line the PCR-RCP would take.  I'm glad that it is available to reference in English so I don't have to rely on my poor understanding of French.

In any case, if readers living on the west coast of Canada find these documents interesting, you should think about attending the 3rd CRC.  The information about how to attend is contained in the first linked document.  Hopefully your experience will be similar to my experience in 2010.