December 06, 2013
It is somewhat ironic to read all of the liberal media obituaries that are praising Nelson Mandela when, at the height of the anti-apartheid struggle, many of these same media sites were castigating the ANC for its violence and supporting apartheid.  There are, of course, those honestly reactionary news sites that are still attacking Mandela as a "communist" who redistributed the land and property of hard-working white Afrikaaners (a strange claim considering that only 7% of land was redistributed and the vast majority of Afrikaaners kept their colonial property post-apartheid), but this kind of openly racist defense of apartheid, common in the 1980s, is now considered bad form.

Mandela's death should leave us with conflicted feelings.  On the one hand, there is the undeniable fact that he was the leader and figurehead of a revolutionary anti-colonial movement aimed at smashing South Africa's apartheid state: this Mandela argued for revolutionary violence, land reform, and the socialization of South Africa.  On the other hand, there is the Nobel Peace Prize Nelson Mandela who, after getting out of prison, agreed to a post-apartheid transition that transformed the ANC into the a comprador government that managed imperialist exploitation and, though ending the legal system of apartheid, did not smash the economic basis upon which apartheid rested.  It is this former Mandela we should mourn; it is the latter Mandela that the liberal media celebrates. 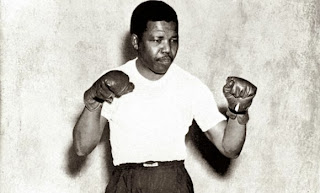 Due to the manner in which the anti-apartheid movement cohered around Mandela's imprisonment, and how the ANC succeeded in using this imprisonment to its political advantage, it is easy to forget that Mandela did not lead the ANC to victory but had simply become, during his long years in a brutal prison camp, a figurehead of the movement.  Indeed, Winnie Madikizela-Mandela was the de facto leader of the ANC in those years whose revolutionary strategy was primarily responsible for forcing the apartheid government into a defensive position.  But where Nelson Mandela is now celebrated as a great figure of liberation, his former wife is castigated as a violent and "hysterical" woman responsible for the deaths of many (as if revolutions do not cause deaths, produced by necessity) and even targeted by the post-apartheid Truth and Reconciliation Committee––a body that would not have existed had it not been for the work of the ANC under this revolutionary woman.  Hence, victory was made possible without Mandela's leadership and the losing apartheid government, realizing that the times were indeed changing, was forced to let Mandela out of prison and cut a deal that would allow its class to keep the majority of its economic power while symbolically "losing" the struggle.  The US was happy with this deal; the ANC was transitioned into a managerial position; the post-apartheid aims of the organization were never realized.

The Nobel Peace Prize Nelson Mandela is thus the Mandela identified by the innumerable liberal obituaries that would never sing the praises of the revolutionary Mandela.  After all, the bourgeois media was horrified by the "necklacing" of collaborators and the general revolutionary violence that pre-prison Mandela (and even the in-prison Mandela) defended as necessary.  The transformed post-apartheid Mandela, however, who helped establish the conciliatory Truth and Reconciliation Committee and the mechanism by which post-apartheid South Africa could be incorporated nicely within global imperialism, is the great man of peace who can be celebrated for his efforts to promote the peace of capital––which is murder and war for the majority of the world's population.

Of course, the fact that Mandela "sold-out" a revolutionary movement is a rather banal point to make when so many revolutionary figureheads of betrayed their movements.  One only needs to look at the recent People's War in Nepal and Prachanda's capitulation and subsequent corruption to realize that betrayal and abdication is always a danger since opportunism will emerge in any and every revolutionary movement.  Mandela did not die in prison as a martyr but instead, when released, found himself in a period when capitalism was declaring itself the end of history and actually existing socialism had failed.  In this new world order, delinked from a movement that had transformed him into a figurehead (and a movement that had already pushed out its most communist elements), capitulation might have appeared as the only pragmatic choice.  For what do you do when you are presented with a post-apartheid deal and you have no concrete understanding of the forces of the organization you are supposed to represent, this organization has not pushed a people's war to the point of strategic offensive, there is a self-proclaimed "new world order" that dominates the globe presiding over the transition, and there is no coherent post-apartheid revolutionary plan other than the negotiations being offered by your former jailors?  The solution to this problem would have had to been found earlier, in the way the ANC conceived of revolutionary power and a post-colonial system, but the kind of theory and practice necessary to solve this problem––part of which was unforseeable––was non-existent.  The selling-out, then, was in someways preordained: opportunism might have been the only door that opened unto a post-apartheid landscape.

And so Mandela's betrayal and abdication possess a classically tragic dimension––transforming him into an Antigone, a Creon, an Orestes––because he fell from heights most of us will never reach.  The Mandela we need to mourn––the revolutionary Mandela the liberal media is deleting in its manic obsession with the Nobel Peace Prize Mandela––is someone who participated in a movement that many of us will never witness and never be forced to endure.  But many of us will abdicate even without such an experience, betraying our movements before they become openly revolutionary, and will thus leave behind paltry legacies that are ultimately forgettable.  Mandela's legacy, conflicted as it was, is still significant and we should mourn his passing… But we should also remember that the revolutionary Mandela died in 1994 and was already mourned.

[On a related note, I am interested in seeing Idris Elba's depiction of Nelson Mandela in the upcoming film.  It is worth wondering whether this film will focus on depicting Mandela in the revolutionary sense that is reviled by the bourgeois media.]