Learning from Documents of Past Struggle

March 23, 2013
On my recent trip to the Maison Norman Bethune I found and purchased a significant document from Canada's New Communist Movement entitled Statement of Political Agreement for the Creation of the Canadian Communist League (Marxist-Leninist).  For those who are unaware of Canada's period of anti-revisionist marxism in the 1970s-1980s, the Canadian Communist League (Marxist-Leninist), which wold eventually rename itself the Workers Communist Party [WCP], was one of the two most significant Marxist-Leninist groups in that period in terms of size and influence––the other being En Lutte! [In Struggle!].  And though many of the WCP's documents––including the one I discovered at the bookstore––can be found on the Encyclopedia of Anti-Revisionism Online, it is always a joy to discover a dead-tree document from that period. 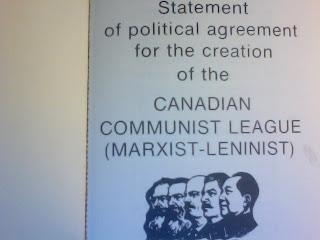 As one of my good friends and comrades has often pointed out, there needs to be a thorough historical summation and assessment of that period––at the very least a historiography similar to those written about the same period in the US––since, despite its significance, it is easily forgotten by successive generations of activists who tend to act as if they are unaffected by the weight of history.  Indeed, sometimes when I mention the WCP and En Lutte to people who are unaware of Canada's New Communist Movement, I am occasionally told that these groups must not have been significant because "well I haven't heard of them."  Of course, the fact that one cannot help but encounter the significance of these organizations if one embarks on a historical investigation of anti-capitalist organizing in the 1970s and 1980s––that one consistently runs into former members, many of whom are now social democrats (i.e. Gilles Duceppe, former leader of the BQ, was once a member of the WCP) or trade union bureaucrats––does not matter to the activist whose understanding of history has little to do with the concrete class struggle in hir own social context.  Perhaps the fact that it cannot matter is because of the lack of a semi-popular historical document that either describes or assesses that period of class struggle in Canada.  Going to fashionable online sources, such as wikipedia, for information does not help either: the pages for these organizations are tiny, often inaccurate, and probably the submitted by former members or former members of competing organizations.  In order to understand their impact one has to speak to the previous generation of Marxist-Leninist activists (even those who despised either the WCP or En Lutte will agree on their significance––how could they not when most of their organizations' ideological statements would always mention these two parties?) or be involved in some sort of archival research.

But if we examine the archives of the Encyclopedia of Anti-Revisionism, it is not difficult to grasp the significance of the WCP and En Lutte considering the fact that almost every other anti-revisionist ML organization spends a lot of their time in line struggle with these organizations.  And as the Encyclopedia of Anti-Revisionism points out in its introduction to its section on the Canadian New Communist Movement, these two organizations were so large that they possessed thousands of members.  Although the fact that these organizations possessed thousands of members might not seem significant when compared to Canada's millions, for a communist organization at that time––or even now––this was indeed a big deal.  No other Canadian communist organization then or now possessed that many members, could produce meetings that would fill halls, or had that power to mobilize.  Compared to the revisionist Communist Party of Canada, whose faithful were several hundred bureaucrats dispersed throughout the country, the WCP and En Lutte were indeed significant.  If we think of communist organizations in this country now, and the meetings organized and called by these organizations, I am certain that we would be impressed if a single event/meeting/action could be filled with a hundred activists militant to a single organization, let alone thousands.

Moreover, these organizations were able to pull in these numbers within a decade of organizing.  If they hadn't collapsed in the mid-1980s then it is worth wondering how large they would be today.  As the Encyclopedia of Anti-Revisionism states:


"By the 1980s, both In Struggle! and the League [WCP] began to enter a period of crisis.  The first group to fall was In Struggle! A combination of trying to reorient to a less dismissive attitude toward progressive movements, the crisis in the world-wide Marxist-Leninist movement, and the demands of women, gays and lesbians, and workers members soon drove it into crisis. At its fourth congress in 1982, In Struggle! calmly voted to disolve. […] The WCP crowed at the dissolution of In Struggle!, but by 1983, it saw its own members question its rigid internal regime and political direction. Unlike In Struggle! whose crisis lasted over a period of almost a year, the WCP dissolved within months. By mid-1983, two organizations that could, combined, bring over 4,000 people to their meetings, had ceased to exist."

The swiftness of this dissolution is almost mind-blowing.  Although the above quote offers some indication as to why these organizations collapsed, it is clearly not a very thorough and scientific assessment: the author, like so many of us, has been forced to speculate.  The same source also speaks of the degeneration of communism in China as a problem, the confusion it spread throughout a communist movement that saw China as the leader of anti-revisionist Marxism-Leninism.  Statement of Political Agreement for the Creation of the Canadian Communist League (Marxist-Leninist), however, does provide some clues for the WCP's quick dissolution.  It also provides some insights that are worthwhile for today's communist movement, particularly in Canada, because we can always learn from the past.

2) Revisionism as the prime ideological problem that needs to be confronted: Revisionism [specifically "right opportunism"] is seen as the key ideological problem confronting the proletarian movement.  Particularly, the League was interested in confronting the revisionism of the Communist Party of Canada [CPC], though it saw opportunism as being a generally wide-spread phenomena.  Now while the latter is still true today, and maybe we can learn something from the New Communist Movement of the need to confront today's default opportunism, the former is no longer a significant issue.  The CPC hasn't been a significant leftist organization for a very long time and is generally just a small group that tries to run candidates in elections but does nothing in the field of militant organizing––or even labour organizing for that manner.  We are well past the time when they needed to be confronted for their revisionism: every serious activist in Canada today understands that the CPC is far from a revolutionary organization.

3) Canada is "an imperialist country of the second world": This is an historically interesting claim since, while it rejects the claim that Canada is not an imperialist power, which was commonly held by other communist organizations––and some even hold it today, it still tries to argue that Canada's imperialism is mediated by the fact that it is part of "the second world".  The problem is that this analysis is dependent on the "three worlds theory" that was never scientific; the WCP was trying to fit Canada into this analysis to explain a phenomenon that still required a far more concrete explanation.  Even still, the fact that it began to recognize the fact that Canada was an imperialist power is significant.  We cannot forget that the PCR-RCP [which in many ways developed its programme due to its assessment of the analyses of groups such as the WCP] is the first communist party in Canada to claim that Canada is an unqualified imperialist power.  And since marxist academics are often wont to tail active communist organizations, a few years after the PCR-RCP theorized Canada's imperialist status, political economists such as Jerome Klaasen and Todd Gordon would argue the same thing.  In 1975, however, such an analysis was generally unheard of.

4) Quebec's status as an oppressed nation: Of course, this claim would not make the WCP any different from the majority of the Canadian left at the time and the majority of Canadian communists even now.  Whether or not Quebec was an oppressed nation in 1975, however, is besides the point; it is extremely telling that in this document there is not even a single mention of the colonized indigenous nations upon which even Quebec was built.  Such an oversight not only demonstrates an unrecognized colonial chauvinism (which, again, would not make the WCP any different from its contemporaries) but an unwillingness to properly apply the theory of the national question to its concrete circumstances.

5) The core of the proletariat can be found in the trade unions: Under the impression that revolution can only be accomplished through insurrection, and that the most organized proletarian core can be found in the trade unions, this document not only argued that unionized workers were the proletariat, but that revolutionary strategy must consist primarily of entering these unions and waging line-struggle against trade union consciousness.  Once reformism and bourgeois ideology within unions was defeated, trade unions could be led by communist cadre and transformed into sites of potential insurrection.  This strategy explains why it seems as if the WCP seeded the union movement with its members, some of whom who ended up in key organizational positions… And yet this strategy might also partially explain the collapse of the WCP: so many of these members, once in positions where they had job protection and comfortable salaries, abandoned the organization––in union circles now it is not uncommon to encounter former WCP members or supporters who have become little more than social democratic trade unionists who were more than happy to walk away from their party.

As noted in the third point, it is worth pointing out that the PCR-RCP's analysis of the current Canadian conjuncture is in part consciously influenced by the failures of the New Communist Movement: it has replaced the question of Quebec's self-determination with the question of the self-determination of Canada's First Nations; it has rejected the simplistic assumption that the core of the proletariat can be found in the trade unions and holds that the economism promoted by Canada's labour aristocracy is not something that can easily be overcome; it has replaced the theory of insurrection with the theory of people's war.  Indeed, once one reads old documents from the New Communist Movement, some of the positions of current revolutionary organizations, such as the PCR-RCP, begin to make even more sense.

Once we are aware of the theoretical positions taken by important past organizations, it is possible to examine the further development of communist theory in a given concrete context.  Those organizations who ignore the past, who act as if it did not happen, are most often those organizations whose theory contains all of the past's mistakes and are in a position to repeat these mistakes as farce.  Those organizations who have some understanding of this past, who have developed a theory based on the successes and failures of their forbearers, are part of a chain-novel of theory, a narrative in development, through which one can trace a line from the present to the originary moments of class struggle.

The most important organizations of the Canadian New Communist Movement consciously placed themselves within this narrative by grasping the history of the Communist Party of Canada and breaking from its limits which, in the 1970s and 1980s, were clearly revisionist.  But these movements also collapsed, incapable of developing anti-revisionism into something more significant than a defense of Marxism-Leninism: they inherited many of the past mistakes, delineating themselves only by their unwillingness to accept a peaceful compromise with capitalism.