January 08, 2013
I am generally annoyed by the academic left's propensity to be hyper-critical on the level of appearance and decidedly uncritical on the level of substance.  The tendency to focus critique on the formal rather than the essential is a product of academicization, a tendency of which I am often guilty––which is maybe why I find it annoying… After all, we often despise in others what we secretly despise in ourselves.

In order to illustrate what I mean by critiquing appearance at the expense of substance, form at the expense of essence, I'll use an example of my union local's strike several years ago that was once the subject of one of my [discontinued] Tao of Mao comic strips.  At one point during the strike a group of people singing a Woodie Guthrie song on the line were chastised as being "racist" over a list serve due to the fact that Guthrie, regardless of the song that was being sung, was responsible for the song "This Land is Your Land".  At the same time, however, the people complaining about the singing of this song had been silent when, just before the strike, a predominantly person of colour executive was targeted by the membership, some of them forced to step down, an instance of concrete racism that was, for some absurd reason, considered less of a problem than a Guthrie song that wasn't even "This Land is Your Land".  More tellingly, however, some of the people who would complain about the singing of Guthrie on the line were the same people who signed a rather heinous letter about the executive's use of "the race card" when said executive accused the membership of racism. 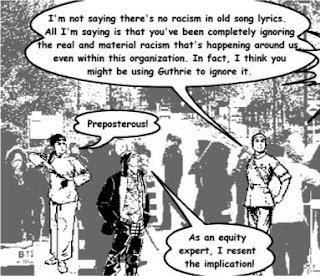 So here the point is not that people should not critique the use of Guthrie––should not remind people of the colonial ramifications of one of his songs and start a debate about whether the existence of this song taints his legacy––but that these peoples' hyper-criticism regarding the [possible] formal expression of racism was absent when it came to the implicit practice of racism in the concrete world.  If one plans to critique the formal appearance of racism in a song, they should be more concerned with figuring out how to critique the essential substance of racism in the material world upon which, in the last instance, appearance and form relies.  Unfortunately we often tend to confuse a critique of appearance with a critique of substance and imagine that we are actually fighting, in this instance, racism when in our concrete practice we are doing nothing of the sort.

I was recently reminded of this problem with the furor of statements and reposted critiques regarding Tarantino's recent movie Django on innumerable academic list-serves.  This film that claimed to be some genre work on anti-racism––some detournement of the racist western narrative––was met with outrage by academics who spent a lot of energy picking the film apart in order to demonstrate that it was still racist or, at the very least, intensely problematic.  I'm not arguing that some of these critiques were without merit, or that the film was some perfect work of anti-racism and thus beyond criticism, because, truth be told, I tend to agree with some of the critiques.  Nor am I arguing that such critiques should not be made and that some of the original essays were as self-righteous as the academics reposting them.  My point, here, is simply to argue that this was another case where the realm of appearance was prioritized as an object of criticism over the realm of substance.

This prioritization was obvious because the many of the same people picking apart Django refused to bring the same thorough criticism to bear on, for example, the "Idle No More" movement.  That is, while they list-serve and facebook posted on the problems with this Tarantino film, they were also list-serve and facebook posting over-the-top cheer-leading comments about "Idle No More" and refusing to engage with the critiques made by indigenous radicals about this movement that, unlike a film, was somehow beyond criticism.  Indeed, in one instance when an article on "Warrior Publications" written by an indigenous radical was circulated––an article arguing that "Idle No More" was being run primarily by the compradori and questioning why some people were more taken with this movement than they would have been with the Kanehsatake uprising ("Oka") or other armed land seizures––the same people who would dismiss all charges of being "overly-critical" when it came to a film as senseless (and perhaps rightly so) used the same charge to dismiss a critique that emerged from one of the radical vanguards of the indigenous movement in Canada.

Going further, academic left critiques of the #occupy movement often demonstrated the same favouring of appearance over substance.  Indeed, the people who critiqued the "occupy" movement for being a problem because of its name (how can a movement veil itself as "occupy" on occupied land?) did not go further and critique the occupy for its actual limitations: many of these critics ended up participating in occupy simply by getting involved and giving their contingent a less problematic name without even once producing a critique of the vague movementism and petty bourgeois limitations of the entire phenomenon: it could be fixed if its name––its appearance––was fixed and this was the limitation of their critique.

More disturbingly, however, is the political puritanism this critical focus on the level of form tends to produce, a certainty that a correct politics is being practiced simply by calling a film, or a name, or the appearance/veiling of politics utterly chauvinist.  And on the level of substance this puritanism––a distorted reflection of the puritanism of those dogmato-revisionist marxist missionaries who refuse to involve themselves in any movement they do not (and will never) command––carries over when they attack people for daring to critique their beautiful movements that should never be criticized.  It wasn't too long ago that some of these academics were calling other leftists "racist" for refusing to support the NATO-backed "insurgency" in Libya, or were at least condemning everyone who dared to claim that the Arab Spring would not usher in socialism.

Really, I'm only asking my colleagues to bring the same criticism they reserve for films and songs and names to the concrete realm of praxis and, in doing so, to respect the critiques from the left that are levelled at the movements they support.