August 25, 2012
Over a year ago I complained about the false anti-imperialism that was being used to defend the NATO interventions in Libya.  At the time, I argued that this was due to a failure to understand imperialism but assumed that those who made these arguments (then, people such as Gilbert Achcar and Jean-Luc Nancy) would be quickly relegated to obscurity, go the way of Christopher Hitchens, or hopefully recant in a year's time when imperialism consolidated its aims in those areas that these very uncritical "leftists" were woefully misunderstanding.  And though it is clear that the majority of the left has either dismissed or chastised these pseudo anti-imperialists as cruise missile socialists, they still continue to babble on about NATO as some sort of "lesser evil" that is supposedly supporting organic freedom movements in Libya and Syria. 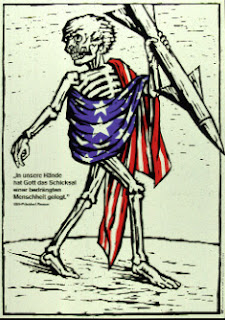 Internet leftists such as Pham Binh and Louis Proyect, for example, have continued to endorse this pro-imperialist leftism (which they attempt to sell as some sort of critical anti-imperialism when it is anything of the sort), screaming that their arguments are not at all identical to the arguments people like Hitchens made about Afghanistan and Iraq.  A rather sad affair, to be sure, since both Binh and Proyect are responsible for websites that has also produced a lot of useful and interesting material… Thus, their capitulation to imperialism has been, at least in my mind, more tragic than Hitchens' capitulation since Hitchens had been a turn-coat since the Falklands War, and never as critically leftwing as his sympathizers wanted to believe, for a very long time.

These cruise missile socialists have produced innumerable essays that support, though claiming with hair shirts and self-flagellation that they aren't really supporting, the NATO interventions in Libya and Syria because––uncritically inspired by the intifadas of the Arab Spring that they seem to think are connected with the movements they're now championing as leftist martyrs against the rest of the left––these are supposedly revolutions.  As I recently joked with an internet comrade, it would be fun to take these essays and substitute Libya with Afghanistan, Syria with Iraq, Gaddafi with the Taliban, Saddam Hussein with Assad… Because what they're arguing (as I noted in one of the links cited above) is identical to what pro-imperialists, especially leftists who pretended they weren't imperialists, argued about the imperialist interventions in Afghanistan and Iraq.  But the Taliban was far more reactionary than Gaddafi (who was once, and I emphasize once, an anti-imperialist), and Hussein was on the same level of reaction as Assad… Really, these ruling classes needed to be overthrown, but the majority of people who argued against imperialist intervention in these cases were conversely trying to argue that we should support the Taliban or Saddam Hussein (some did, but they were idiots) and you don't need to side with a local dictator to oppose imperialism.  So why do we now, in the instances of Libya and Syria, have a forcing of this bullshit binary?

Well Pham Binh had a wonderfully genius answer in a comment string to one of his posts when someone mentioned Afghanistan.  He rhetorically answered this critic with a comment about how they were "lumping every Third World country together as part of a 'foreignstan' where you can apply one-size-fits-all-cookie-cutter political lines." [It's in the comments section of this post, though I am loathe to send any traffic that way at this moment.]  Wonderful rhetorical attempt to dodge the question, and an abdication of historical materialism.  Thing is, Pham Binh, the revolutionary forces in places like Afghanistan [like the CmPA] do see the imperialist interests in the surrounding region as part of the same project.  Hell, I guess they're also guilty of "foreignstaning" things.  I also guess it's also wrong to look at similarities in imperialist strategy, because every instance is unique, and so why talking about a theory of imperialism to begin with?  The rhetoric is telling because, with its reliance on a red herring fallacy, it clearly abdicates guilt by shifting the argument into tangental territory.  It is also quite humorous because the same "foreignstan" argument applies to the Pham Binhs of the world: why do you think the movements of the Arab Spring are the same "one-size-fits-all-cookie-cutter" movements of Libya and Syria?  Really, the only reason people such as Binh and Proyect care about Libya and Syria is because of Arab Spring [and the imperialists have been working hard to manufacture the supposed similarities, so it's not surprising] and they've been doing their own homogenization (only here it actually is a homogenization and not a universal theorization, geez guys work on your theory!) and then accusing their critics of such homogenization when they're the guilty party.

Perhaps this pseudo anti-imperialism is just some Obama era obsession with "peace-keeping"––you know, the friendlier face of imperialism that US citizens don't understand is still imperialism because they're used to confusing imperialism with George W. Bush style militarism.  But up here in Canada, those of us who understand that Canada is also an imperialist country, are pretty aware that this way of doing interventions isn't somehow anti-imperialist.  So perhaps the mistakes of people like Binh and Proyect can be written off as another version of American exceptionalism.  After all, the global revolutionary movements that they don't care to understand (because they're not in Libya or Syria) have been saying the same thing about the imperialism they like.  But oh well, I guess they can just mobilize their oh-so-clever "foreignstan" arguments against Afghani and Indian revolutionaries for daring to conceptualize an internationalism.

Just as we never needed to make this argument about the Taliban or Saddam Hussein in order to condemn imperialist interventions there, why do we suddenly need to make up a false anti-imperialist history for people like Assad?  This was someone who had Palestinian revolutionaries hunted down, who permitted the Israeli occupation of the Golan Heights, who occupied parts of Lebanon, who condoned the torture of foreign citizens who were shipped to him by CSIS and the CIA… a representative of the compradori at one point, more a leader who wanted to be part of the imperialist camp but never was very good at it and spent most of his time doing it for an imperialist power that wasn't the prime imperialist power––why are we supposed to suddenly see him as an anti-imperialist hero?  Just because the Binhs and Proyects of the world support the anti-Assad NATO intervention, that's why, not because of anything actually concrete.  But no matter: we can make up whatever we need to justify our support of a comprador regime that has fallen out of favour, and who the hell cares if we didn't do this for the Taliban or Saddam Hussein!

We need to return to a proper anti-imperialism that places the onus of oppression on the imperialists without necessarily assuming that the vilified parties are, just by virtue of being vilified, automatically anti-imperialists.  Again: we didn't do this with the Taliban, and we didn't do this with the Iraqi Ba'athist regime, but at the same time we could grasp that the imperialist interventions in these contexts were imperialist.  You don't need to support reactionaries to accept the fact that imperialists only intervene in "foreign" theatres in order to do imperialist things, and that the people they back will end up becoming (as they always have become) representatives of imperialist power.  To suddenly pretend that Libya and Syria are moments of a low-level humanitarian intervention, and that what these interventionists are telling us about the forces on the ground is correct, is ludicrous.  At the same time, to pretend that the targeted regimes are revolutionary, or anti-imperialist in a subjective sense (because anyone who opposes imperialist intervention, even for the wrong reasons, is temporarily objectively anti-imperialist, but this is always and only temporary), is just a knee-jerk reaction to idiotic pseudo anti-imperialism.

So levity, please!  No more cruise missile socialism, nor more simplistic anti-imperialism that is tendered only to attack cruise missile socialism, and let's return to making leftist critical analyses of concrete situations.  Because if the Binhs and Proyects of the world are incapable of making concrete analyses of concrete situations (and in the cases of Libya and Syria this incapability is clear), then it's rather pathetic to respond with the same idealism.