May 05, 2012
In past entries I have complained about a class essentialism where a social relation is misconstrued as a social essence.  If the proletariat is the revolutionary class, the argument goes, then every individual proletariat is essentially revolutionary.  Spontaneous rebellions on the part of the working class will be necessarily revolutionary; the ideology of the working-class in these situations will develop on its on and might not need the help of an "outside" party.  Any mistakes made by this essentially revolutionary class are understood as the fault of outside agitation, for internally the proletariat can be nothing other than revolutionary (for that is its true nature); indeed, any chauvinism expressed by this class is nothing more than an ideology imported by the ruling class to "divide the workers"––a temporary confusion, nothing to which they are truly committed. 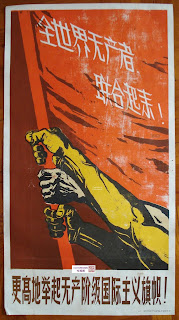 One rather dubious definition of fascism claims that fascism is a "petty-bourgeois" phenomenon and not at all, as history would otherwise force us to accept, a phenomenon that received its strength (and continues to receive in new fascist movements) from a working-class whose interests are mobilized in a counter-revolutionary and reactionary fashion.  For if the working-class is essentially revolutionary, then one cannot accept that fascism was possibly a right populism.  Here we have a working-class that is responsible only for revolution, and not at all responsible in those instances where it has sided with reactionaries because in these instances it was only manipulated, tricked, openly coerced.

Or take, for example, the proposition of a pure proletarian culture that often produces a crude anti-intellectualism.  The working-classes aren't academics, this argument goes, and this is just part of what they are.  So rather than realize that this is a question of access and literacy, in order to celebrate some essential working-class culture we reject anything that smacks of intellectualism as essentially bourgeois forgetting that what is bourgeois also emerges from a social relation.  And yet to speak of this supposed essential culture of the proletariat is another form of elitism that simply enforces the bourgeois division of thinking and working.  As Rancière writes in Proletarian Nights:


To keep their place and keep the shoemaker in his, they must pay a cautionary visit to the workshop, even if it means giving up a little of their usual comfort: "Certain folks go down into the workshops in wooden clogs, for fear of seeing the common people go up to their homes, even in pumps."

But those of us who claim class is a relation and not an essence argue that there is no revolutionary class that just is, waiting for the perfect time to bury capitalism forever; rather, the revolutionary class is made.  Nor is there simply a homogeneous working-class (with a single culture and perfect unity that might be split by outside agitation) but numerous working-classes separated by the molar divisions of nations, colonialism, imperialism… further separated by interior divisions sexism, racism, ableism, queerphobia, etc.  And if we are speaking of working-classes that often lack unity, then the question of how to produce unity becomes extremely important.

The problem, however, is that class essentialism, by presupposing that there is a unified nature of proletarianism, assumes that the revolution is already unified and just waiting to reveal itself as fully unified or, failing that, for a perfectly pure party grouplet to wave its magical wand and produce unity when the conditions are right… abracadabra revolution!  This is why internet marxists will argue that there has "never been a proper socialist revolution" since a proper revolution would be one in where the proletariat would take power without any problems, altogether in one united mass, for the proletariat once moved to agency is capable of only pure unity.  Together they share in the same essence, together they are united, and all problems to date are simply the fault of dodgy "stalinoids" who got in the way of this natural unity with their treacherous authoritarianism.  A pure revolution that exists outside of time and space, lurking beyond a future horizon, waiting for the right moment to emerge.

These fever dreams of a perfect revolution, however, are little more than exercises in idealism––for there is no perfect revolution, no dinner party, just as there isn't a pure marxism.  And once we step outside of the boundaries prescribed by class essentialism, and grasp that there are multiple working-classes requiring revolutionary unity, we cannot help but notice the preponderance of the ideological instance.  Bourgeois ideology is hegemonic, is the "common sense" to which everyone living in capitalist society has been socialized, and has even become the reflection of the values of large sectors of the working-classes.  Since this ideology is so compelling, all supposedly "spontaneous" struggles of the working-classes have never been entirely unified or revolutionary; rather, regardless of the right to rebel and justifiable militancy, on the ideological level they generally continue to reflect the values of the bourgeoisie.  And here I don't mean "bourgeois values" in the crude sense––the values of art and culture that are understood as bourgeois because they are only the purview of the bourgeois and petty-bourgeois classes––but in the full ideological sense: bourgeois values because they are the values that justify the persistence of the bourgeoisie.


It is here that the limits of the natural [essential] 'spontaneous' potential of the working-class movement are most strikingly revealed because, lacking scientific knowledge of the nature and social function of ideology, the 'spontaneous' ideological struggle of the working class is conducted on the basis of an ideology subjected to the insurmountable influence of the ideology of the bourgeois class.

Meaning, for example, the tendency for these movements to lapse into reformism.  Meaning, the reason why Lenin argued for the necessity of recognizing the limitations of "trade union consciousness".  Meaning, the necessity for organizing a structure that can unify this struggle under a different and far more revolutionary banner.  [And yes, I recognize the possible contradiction of throwing in this statement of Althusser's after quoting Rancière's Proletarian Nights which was supposed to be an attack on this position.  Deal with it: I don't really think, contra Rancière, the two positions are entirely contradictory––but that is something I am unprepared to argue here and is somewhat off-topic.  I will add, however, that there is someone presenting a paper about this at the Historical Materialism Conference in Toronto on Saturday, May 12th at 11:15.]  We have observed how these struggles, as militant as they might become, have often had an ideological line that is little more than a pursuit of a more humane welfare capitalism.

Clearly the party that can unify these tendencies within the working-class movement can never exist from completely outside its orbit––it must have emerged from the most ideologically advanced elements of this movement and return, with a unified revolutionary science, to the mass working-class movement [and this is how I think the possible contradiction between Rancière and Althusser is overcome]––but this moment of unification is necessary to consider.  And those who adopt a class essentialism will argue that there is no need for such a unification because it already exists, regardless of the evidence.  For if such a unity existed then every spontaneous uprising would have succeeded in birthing revolutionary circumstances, every rebellion would have led to a pure revolution, and if the working-class is so perfectly unified in its essential revolutionary orientation than why the hell does it still produce reformist and spontaneously limited movements?

More importantly, however, is how class essentialism prevents us from understanding that the period of socialism is a class struggle.  Since the class essentialists would have us believe that an authentic revolution will happen according to some pure class consciousness, and that the dominated classes will somehow be unaffected by bourgeois ideology, then any anxiety over capitalist restoration is unjustified.  Best not to think about it: why would such a shibboleth be a problem if the actual capitalists have all been done away with and the proletariat, channeling their angelic nature, are in command?  Because, those of us who are not class essentialists argue, bourgeois ideology remains and all of those who fought for this revolution were programmed to gravitate towards these ideas.  In any revolution we emerge covered in the filth of the previous mode of production; we cannot simply cleanse ourselves, breaking easily with the past, at the altar of revolution.  And if we don't accept that bourgeois ideology can linger in the superstructure and obstruct the base, then we will remain blind to possible bourgeois restoration.  Here, even the unifying revolutionary party is possibly suspect; real life is far more messy than the class essentialists would have us believe.