December 05, 2011
After so many "serious" blog posts (most of which degenerate, as usual, into rants) I figure that it is time to write something not-so-serious––or, at the very least, less contentious [maybe].  Since I have not blogged about films and books for awhile (and since I used to have the odd film or book review peppered throughout this blog), I'm going to spend this post gibbering on about what I have been reading, watching, and listening to this week.  This will perhaps give people an insight into the strange landscape of my interior life: no I do not only read Marxist/Leninist/Maoist literature, or only watch "political" movies, dismissing everything else as "bourgeois" and hardly worth my notice.  So, in no particular order, I will describe the cultural products (some of them crap some of them not crap) that are not specifically marxist that I have been shoving into my brain over the past seven or eight days.

1Q84 by Haruki Murakami (novel): I'm halfway through this massive novel and am somewhat disappointed.  Seven years ago I picked up Murakami's The Wind-Up Bird Chronicle and like so many others fell in love with the author.  Considering the size of 1Q84, I was under the impression that, unlike his previous novel (After Dark), I would encounter something just as good (if not better than) Wind-Up Bird.  I mean, Kafka On The Shore was almost as good as Wind-Up Bird, but since it was half the size it couldn't cover as much territory.

Unfortunately 1Q84 meanders a lot, doesn't have the same resonance and depth, and in so many ways feels derivative of Wind-Up Bird.  To be clear, I am enjoying the novel, and I think the concept is interesting enough to keep me hooked, but I feel that it isn't as good as it could be––a strange feeling to have but, if you've read Wind-Up Bird (or even Hardboiled Wonderland and the End of the World or Kafka On The Shore) then you'll know what I mean.

Granted, I'm only halfway through: perhaps it will get better.  So far, and aside from the meandering plot, there are annoying aspects to 1Q84 that continue to frustrate my reading enjoyment.  I mean, what the hell is with the fixation on womens' breasts?  Despite the supposed "feminist" moments in the novel (the character Aomame is an assassin who murders misogynist and abusive men), every chapter forces you into the male gaze where Murakami is describing the female anatomy, specifically "breasts".  Now I get that the character Tengo has some Oedipal fixation on that part of his mother's anatomy, and that maybe if Tengo is secretly the author of 1Q84's narrative then we're simply being treated to his fixation, but it is just bloody annoying.  Male gaze aside, it feels entirely juvenile: Murakami's breast fixation in this book is like that of a teenaged boy who has just hit puberty––you expect more from one of Japan's leading writers.


Sennentuntschi by Michael Steiner (film): A very disturbing and cunningly executed movie from Switzerland that plays on an old Swiss folktale, revealing its inherent misogyny.  The time framing is very well done, but if I say anything further on this it will ruin the movie. 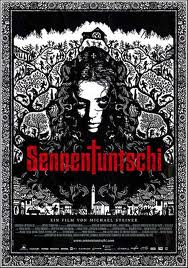 My partner's short analysis of the film goes something like this: "moral and social codes allow men to make their sins invisible. The mystery of the film is whether these sins reappear as ghosts in the shape of women or as women's hysteria. Either way there is punishment Watch at your own risk."  She twittered something shorter and similar.

Sennentuntschi is the type of horror film that is made only once in a while these days––the kind that pushes for a sense of sinister dread and ominous atmosphere rather than wallow in blood and body horror.  Not that there isn't blood or body horror.  And the film's depiction of sexual violence, though treated the way that sexual violence should be treated on screen––as disturbing rather than sensationalized a la the Watchmen movie or, in another way, Irreversible (the former's depiction appeared to glorify rape; the latter used rape simply as a shock tactic rather than to make any point about violence towards women)––is still something neither myself nor my partner could watch.  We love horror movies, though, and especially those horror movies that take the time to really deal with the violence underneath society.


Sennentuntschi felt like Sauna (though set in a different time period), and like Sauna it fell flat on the ending: the pay-off is a little too hurried and overly obscure, and the moments before the ending should have been where it stopped.  I think that some screen-writers and filmmakers don't know where to end their films.

Episodes of The Walking Dead (television): Did I mention that both myself and my partner like horror?  And we both have a soft-spot for zombie horror, especially since the original Night of the Living Dead uses the zombie genre to examine race in 1960s America (the black protagonist survives the zombies only to be murdered by white rednecks at the end of the film).  And yet most zombie horror since Romero has been just a rehashing of the same zombie tropes.  28 Days Later, which was not exactly a zombie film, is probably the only exception.  Otherwise most zombie films (whether with slow or fast zombies) are rather derivative. 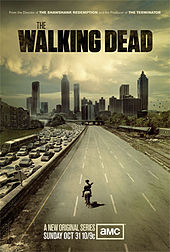 The Walking Dead is definitely derivative.  The comic series, which I started reading years ago and never finished because I found it rather unremarkable, was the basis for the series (though the series departed pretty early on, and maybe for good reasons, from the comic's narrative) and every time I watch episodes in this series I keep asking myself why they chose The Walking Dead as the source material.  Hell, even the beginning of The Walking Dead is bloody derivative (man wakes up in hospital from coma to find the world has gone to zombie apocalypse – clearly the author ripped this off of 28 Days Later).  Plus, the story of the father searching for his family in zombie land was already done in the cult novel The Rising, and done better (but with shitty prose, unfortunately) because it was in a context that was also a new take on the zombie.

And why is the main character a pig?  I'm tired of white cops who are dude's dudes saving the ladies and the people of colour.  I want to see an adaptation of Alden Bell's novel The Reapers Are The Angels which is the only original zombie story since Romero I have ever encountered.  Not because the zombie apocalypse is different (there is no faster zombies! super zombies! zombies from outer space!) but because the approach to the zombie apocalypse transcends the genre and is not merely a repetition of the same Hobbesian narrative.  None of this is to say that The Walking Dead isn't enjoyable, and isn't filled with dramatic tension, but just that, like the majority of zombie movies and books and comics out there right now, it does nothing new or interesting with the genre.  If you want zombies in a context that goes beyond zombies, read The Reapers Are The Angels (Faulkner and O'Connor in zombie world is what critics are saying); if you want the same old zombie apocalypse, then watch something like The Walking Dead.

Second Manifesto For Philosophy by Alain Badiou (philosophy book): Yes I try to keep up, somewhat, with Badiou since I am supposed to be a "philosopher" (well that's what my PhD says, though sometimes I feel a little alienated from this discipline), and even though I disagree in so many ways, philosophically, with Badiou… Even though I feel that his philosophical concerns are a dead end for thought. 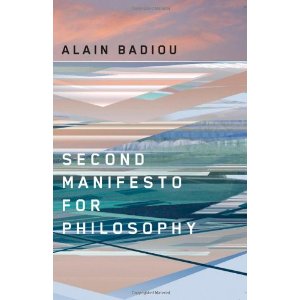 At the same time, though, I've always been impressed that someone is doing ontology in the way that ontology was done before logical positivism and post-structuralism––that is, in a way that ontology was done before the so-called analytic-continental divide.  Of course, sometimes I also think that ontology is a bloody waste of time.  Nor do I think that Badiou, even if he is an ontological "genius", can call himself a materialist when he is obsessed with reconstituting Plato for his ontological inspiration.  Call it what you want Badiou, but it does smack of sophistry when you try to say Platonism is not idealism (it is): there is a reason we trace the division between idealism and materialism to the division between Plato and Aristotle; anyone who calls themselves a Platonist, neo-Platonist, Platonic Realist, is an idealist unless they aren't doing Plato.

In any case, and as I have complained before, I do find it odd that Badiou is becoming the theorist flavour of the year outside of Philosophy (or those who study, outside of philosophy as a hard discipline, the history of this sort of philosophy).  Ontology is something that is one of the concerns of philosophy and there is no possible way that a book like Being and Event can be understood by people who do not have the requisite ontological background.  After all, there are things in math and physics that we would not be able to understand without being mathematicians and physicists: Badiou's philosophical work is a work that exists at that point of philosophical investigation that no one has really been doing since the early twentieth century and is what could properly be called philosophy––not theory, not the theoretical flavour of the week that can be dropped into some random literary theory course beside excerpts from other "hot" theorists.  Which perhaps demonstrates the problems with this sort of theorizing.  Outside of a philosophy context Badiou reads as bullshit, as another charlatan (or terroriste obscurantist as Foucault once called Derrida), which is probably why so many academics, who like to yammer on about what sounds brilliant and profound [brilliant and profound understood as something rendered opaque by jargon and thus understandable only by the "enlightened" few, if understood at all], are into Badiou.

Apokalypsis by Chelsea Wolfe (music): I have been listening to this quite a bit over the past month, thanks to a comrade blogger who sent me the album, and am really into Wolfe's creative channelling of PJ Harvey, Sonic Youth, black metal ambience, to make music wholly her own. (There is also the fact that she covered Burzum's "Black Spell of Destruction"––say what you want about Burzum [fascist scum that needs to be purged whenever the revolution happens], Wolfe's cover is weirdly cool and, um.... disturbing?)  In any case, check out her live performance of "Pale on Pale" and the video of "Mer", both different sounding but still the same, and you'll probably be hooked.