October 12, 2011
In my previous post I discussed the ideological boundaries, the general petty bourgeois consciousness, that currently delimit the politics of the #occupy movement.  Now that it is about to arrive in Toronto, the facts I described are becoming more evident––especially when the excited organizers (or non-organizers considering the reality of the we-have-no-leaders informal leadership approach) and soon-to-be participants are making absurd exclamations like "it's time to take Canada back."  But Canada was always a colonial-capitalist nation, an imperial settlement since its inception, and these demands to return to a rosier and friendlier settler-colonial capitalist reality runs dangerously close to reactionary nostalgia.  [Tangental point for Jude and Sarah: a nod to our discussion of the politics of nostalgia!]  A desire to return to something that did not exist, a desire to make capitalism more humane like it was in "the good old days" (was it really, and for what class?), can easily turn reactionary: it not only obliterates the memory of the past's victims, but it runs parallel to the ultra-conservative desire to return to the days when white male supremacy was largely unchallenged.

So how do we challenge the default reformist politics that currently has hegemony in the #occupy space. The political group(s) that I'm involved with have decided to enter the #occupytoronto site as an anti-imperialist contingent, rather than separately and disparately, so that our politics are obvious from the beginning.  Since the day that #occupytoronto begins (October 15th) is also the same day as the 10 year anniversary of the invasion of Afghanistan, it is perfect to mark our participation in this "occupy" movement as a participation qualified by our anti-capitalist and anti-imperialist politics.  You cannot talk about justice for the 99% unless you realize that the 1% also accumulates wealth through the export of capital (which means imperialist plunder and militarism), or that the entire 100% is composed of colonizers and colonized and that "Canada" as it currently exists cannot be "taken back."  Unless, of course, we mean taking back land in the anticolonial sense… but the use of the national term Canada already forecloses on this possibility. 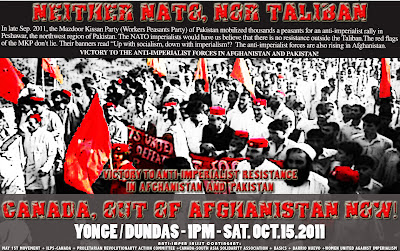 I still think, as I argued in the post cited at the outset of this entry, that there is a lot of potential in the #occupytoronto space.  The problem, though, is how to utilize that potential: do we hide our politics and tail the politics of the [informal] organizers, do we ignore the movement altogether because we cannot help but shudder when people talk of "taking back Canada", or do we involve ourselves in a way that demonstrates a clear and principled political line?  Clearly I side with the third option because, as I have argued before, the other two options are politically paralyzing and do nothing to accumulate the revolutionary forces necessary to build the structure that can challenge capitalism.

Moreover, not only do I think that our politics should be evident; our politics need to be expressed in our actions.  We should not get involved simply to proselytize because we should not be missionary dogmatists who, instead of doing any on-the-ground work, waste their time selling papers and fighting over the proper slogans.  Our politics should be recognizable in our words and discussions, in the manner in which we enter spaces, but it's more important that these politics are seen as inseparable from our actions.  Being a good communist not only means being recognized as a communist because you're carrying a bloody hammer-and-sickle flag (or some other variant), but being known for actually serving the people.

[The Anti-Imperialist Contingent of the March consists of the following groups: the May 1st Movement, Women United Against Imperialism, Basics, the Canada South Asia Solidarity Association, Barrio Nuevo, International League of Peoples Struggle Canada, and the Proletarian Revolutionary Action Committee.]