July 12, 2011
This post is mainly an info-blurb.  Recently, because of some of the questions and comments I have received from friends and comrades about why I sympathize with the PCR-RCP more than other Canadian groups, I have started to write a semi-biographical and meandering discussion of how and why I became interested in this organization.  (Oddly enough, if I was just to continue participating in the loose-knit "movementist" community, in my union local's working groups, or in any other acceptable Toronto leftist organization, I doubt I would ever be asked this question: what is part of normative activity, even within the critical left, is always reified.)  As I had explained my "philosophical" biography in the previous entry, I supposed it would be appropriate to follow with another "political" biographical entry.  Since that entry's draft still requires organization and focus––and now will most probably be two entries––I have decided, in the meantime and since it has been days since I last posted, to write a small blurb on something that was tangental to the post-in-progress.

Due to my involvement with the Toronto Proletarian Revolutionary Action Committee (PRAC-Toronto), I have been helping distribute the Partisan, a free and non-sectarian revolutionary newspaper that is produced in collaboration with the Revolutionary Communist Party of Canada (PCR-RCP, and as many of you who read this blog already know, not to be confused with the problematic RCP-USA south of the border).  One of the reasons for the free distribution of this paper––which is now being handed out in numerous Canadian cities––is to disseminate communist ideology, and an anti-capitalist analysis of  current events, as a counter to all the free pro-capitalist propaganda people can pick up at street and subway news stands.  Since the articles printed in the Partisan, despite coming from a Maoist position, generally represent positions that most anti-capitalists should be able to support, the idea is that even people who might not entirely sympathize with the PCR-RCP would be willing to participate in its dissemination. 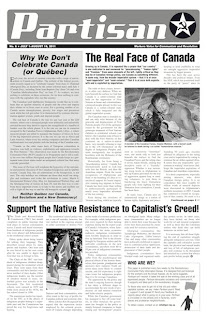 Another reason that I have found distributing this paper important is that it actually provides an opportunity to talk with people who are otherwise ignored by left-activist cliquedom––people who did not necessarily have the privilege to go to the same universities, or get accepted into affinity groups and popular left organizations––but who might, because of their everyday experience, be interested in the possibility of anti-capitalist revolution.  The point is to not disseminate the Partisan within already left-wing contexts (i.e. demonstrations, protests, marches, fundraising events), paper-pushing to the converted with a paper that is basically a revolutionary news alternative rather than some sectarian party organ.  Rather, just as the Metro distributes its culture industry anti-worker rag at subway stations every day, we think it's actually important, as people who claim they are communist, to spread a revolutionary paper just as the bourgeoisie spreads its paper.

When I have participated in the distribution of this paper (as I mentioned in my anti-Canada Day post), despite the odd encounter where some bourgie asshole tells me "fuck off," I've often been surprised at the willingness demonstrated by some to not only take a paper that I'm proclaiming is revolutionary and communist, but to sometimes stop and engage in a discussion.  Being able to actually talk about communism in the street––not at demos or universities––and to do so in a way that is not a dogmatic pitch (we're just doing the same as the Metro distributers are doing, only when some people take our paper they want to talk about the content) is important.  Those of us who still believe that communism is a vital alternative for the long nightmare of capitalism need to make communism part of everyday discourse as best as we can.  In other countries this is understood as important; we need to do the same here, but in a way that is not offensively antiquated and cultish––as the newspapers pushed by certain sectarian groups and cabals, usually only at leftist gatherings, sometimes make us seem.

So if anyone is interested in distributing the Partisan––anyone in any communist or anti-capitalist group that can sympathize with the need for a revolutionary newspaper––feel free to check out the link on the PRAC-Toronto website to find out how you can participate.  You can even download a pdf copy of the most recent issue there to see if it's something you want to distribute.