Our Complaints, Our Freedoms

April 19, 2011
Once again I have been informed, by those who believe they are in the know, that it is wrong for me to complain about the Canadian state since I have the freedom, unlike others elsewhere, to complain about this state in the first place.  Why agitate to overthrow capitalism here, why complain about welfare capitalism here, when people in, let's say, Egypt, are dying for the right to have liberal capitalism.  (And is that really what they are dying for––is that the limits of the Egyptian left's demands, nothing more than liberal capitalism with a parliamentary democracy?)
Clearly the most obvious problem with this argument is its logical form.  Here at the centres of capitalism we have all these "freedoms", including "free speech", but it's supposedly in bad taste to use these freedoms.  You're lucky you have the right to complain or even talk openly about anti-capitalism without being shot by a cop, we are told, so really it is just rude and perhaps even immoral to complain, let alone talk about scrapping the whole damn system, when it gives you so much autonomy!  You have the right to be publicly defiant, within reason of course, but this right is somehow supposed to imply that we should not even use it in the first place.
The larger problem with this argument, however, is what it implies historically.  We are meant to believe that it was capitalism and capitalism alone, especially the capitalism of the world's imperialist centres, that has provided us with all this wondrous freedom.  Capitalism with its magical market apparently conjured out of thin air the right to free speech, the right to participate in the meaningless parliamentary game of the dictatorship of the bourgeoisie, the right to have things like public sanitation and public education, even the end of slavery!  Are there no miracles that capitalism has not accomplished? 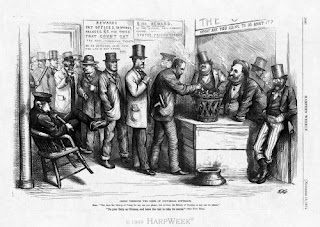 Universal Suffrage brought to you courtesy of capitalism!
Jeff Noonan has argued, however, that capitalism, if left by itself, follows an anti-life logic, moving towards the destruction of life as we know it, whereas everything that makes life liveable under capitalism is due to anti-capitalist struggle.  Socialism emerged at the very moment capitalism appeared on the world historical stage––initially as utopian and eventually as scientific.  Marx and Engels spent a lot of time excavating the anti-capitalist subterranean history of capitalism: Muntzer, the Diggers, the peasantry and workers in the French Revolution, Robert Owen––all of those currents of utopian socialism that first reflected a desire to overthrow capitalism and expressed this desire from the very dawn of capitalism.  The fact that the workers and the peasants were involved in the French Revolution pushed the most radical sectors of the Jacobins to demand changes that transgressed the imagination of the emergent bourgeois class.  And Toussaint L'Ouverture and the Haitian Slave Revolution demonstrate another facet of radicalism in the French Revolution that went beyond the demands of the soon-to-be ruling class.

Capitalism began the demystification of the world, stripping the societies in which it appeared of metaphysical alienation, and it was this demystification that permitted a radical critique of its own existence.  Now it has remystified things, establishing itself as supposedly eternal by reifying economic alienation, but the death sentence it levelled upon the ghost-haunted world of pre-capitalism is one of those factors that produces its own grave-diggers.

After all, capitalism by itself can function quite nicely without all of these "freedoms" it has supposedly produced.  In Democratic Society and Human Needs, Noonan demonstrated how the ideologues of capitalism have, in every era, always been opposed to those very freedoms we are supposed to believe came from capitalism in the first place.  The original liberals were actually against universal suffrage, public sanitation, free speech, and all of those things that apparently make us "lucky" to live at the centre of capitalism.  The only reason these freedoms exist is because of anti-capitalist struggle, because people fought and died for these freedoms, and the only reason these freedoms are limited is because the boundaries of capitalism have chained them to a discourse of human "rights" (Mill's harm principle being a good ideological example of this), an operationalization of capitalist logic, a deformation of the initial radical demands.

So when we "complain" about this wretched system, even if we are privileged (in some cases) to live at its centre, or even go so far as to demand its destruction, we are not being rude and failing to recognize that the welfare capitalism of the imperialist centres has been oh-so-nice to grant us this so-called privilege.  It has granted us nothing: our predecessors took, with their labour and blood, these privileges and their demands were often larger than the privileges they were granted––they were always demanding more, always attempting to transgress capital's limits, forcing the system to mutate to keep their rebellion in line.  If we are lucky to live in this society (and only some of us are lucky and always, due to capitalism's nightmare logic of surplus-value and expansion, at the expense of others elsewhere) then whatever "luck" we possess is because of struggle.  Not because this is the "best damn system" or the blood-soaked "marketplace of ideas."  These freedoms come from our complaints, but only when our complaints have been turned into revolutionary practice.