Oppressors Who Think They're Victims


I cannot stand people who occupy privileged positions and groups who have convinced themselves that they are victims.  This is a long-standing persecution fashion: imagine that you’re the oppressed rather than the oppressor - even better, imagine that the people who you help oppress (either explicitly or implicitly) are the real oppressor.  So when some lone and desperate individual in an occupied country suicide bombs the occupier, the surviving occupiers can say: see how they victimize us, see how they’re murderers!
Most often this false victimization happens because of gains made by the oppressed.  The former oppressors, suddenly experiencing a loss of the privilege they had taken as absolute, imagine that they are being oppressed.  "You mean I can't automatically have this job because I'm white and male?  I'm being attacked and harmed!"   So when the oppressor discovers that his privilege is not a fact of nature, and that he is not ontologically destined to be privileged, he sometimes experiences this loss of power as violence and victimization.
False victimization also permits scape-goating.  Fascist movements always count on mobilizing the poor against their own interests by convincing them that the reason for their poverty is because of oppressed groups: "it's the immigrants, the visible minorities, the women who are responsible for your poverty - don't you want to return to the heroic days of the country where you were guaranteed a job by virtue of your skin colour and gender?"  Not that these "heroic days" ever really existed, but the appeal is compelling.  Scape-goating, especially if it's combined with an appeal to patriotism and religious mystification, is a successful strategy - and the rise of the Tea Party south of the border is the most modern example of this logic.
In any case, when it comes to this complex of false victimization, there are three often interrelated examples that always annoy me.
1.  "Misandry"
I hate this word that is raised by Mens Rights Activists in opposition to misogyny.  Since feminist activism in North America has succeeded in achieving some significant gains, the austere Patriarchy of the good old days is no longer what it once was.  But even though patriarchy and misogyny still exist, and have been rearticulated and restructured in response to feminist struggle, men who dream of 1950s family values feel as if they are the victims.
When someone uses the word misandry (man-hating) what they are really saying is this: "You mean I have to treat this woman as an equal in this specific context?  I am not permitted, as intended by God and nature, to beat my wife?  You're giving this job to a woman and not to me?  Well then clearly I am being discriminated against on the basis of my maleness!"
Here is a clever comic from a repugnant libertarian site that is dedicated to "anti-misandry" and mens rights: 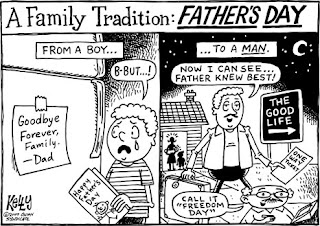 Oh no! Those feminists are against the natural order of the Family!  They will get rid of the Patriarch forever!  Fathers are actually being forced out of the home because they're not allowed to beat the mothers anymore and chain them to the kitchen and the womb!  No more Father's Day!  The horrors!
Anyone who thinks that misandry actually exists is arguing that misogyny is normative and that any attack on the patriarchal artifice, no matter how small, is an act of hatred.  An appeal to misandry ultimately means that misogyny is natural and acceptable, the way things should be, and that violating this natural state of affairs is an act of violence against men.  In other words, the appeal to misandry holds that men are the only valid subjects: giving political rights to female objects is an act of violent hatred because only subjects can experience violence and victimization - a woman is incapable of experiencing victimization because objects are incapable of experiencing violence.  Therefore, according to this logic, there can be no such thing as misogyny - there can only be misandry.
2.  "Reverse Racism"
The logic of this cry of false victimization is identical to "misandry" - people who believe that this concept actually describes social reality are just upset that they aren't living in the days before Civil Rights or during slavery.  The fact that whites had the privilege they did before the rise of the Civil Rights movement, and still enjoy the historical fruits of this privilege, is because of the oppression of slaves and non-white low class workers.  But now that a small minority of people of colour are occupying better jobs, there is reverse racism!
Barry Deutsch has a great comic about this that, I think, shows the flawed logic behind the notion of reverse racism.  And though this comic has been posted on numerous blogs and facebook pages in the past, it is worth posting again: 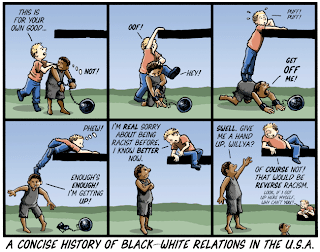 People who speak of reverse-racism are unwilling to accept that they are just upset that they cannot be traditional white supremacists.  In the United States they're even more upset that they have a black president (although I think Obama is just another imperialist, we still have to ask whether there would be a Tea Party if he was white).  They probably think that reverse-racism is the reason why Obama is president.
The logic here is that people of colour are incapable of succeeding in anything unless they are helped out by "unfair" social programs that take jobs away from good old white folks.  It assumes that there is an equal playing field, that there was no such thing as slavery and colonialism, and that individual hard work alone is the guarantee of success.  The fact that generations of privileged whites have had jobs and opportunities handed to them at the expense of those they were standing upon is utterly ignored.
The claim of reverse-racism comes from knee-jerk white supremacy, and I'm getting tired of those wealthy white [and most often male] students (the ones who take up most of the class by thinking they have more of a right to speak than anyone else) saying that "today it's only socially acceptable to discriminate against whites."  I really should just have this cartoon made into a shirt and wear it for the first week of classes every year.
3.  "Christianity is under attack in North America"
This belief is particularly pernicious at this juncture of history.  Not only is there a rise in Islamophobic hate crimes in North America, not only have countries with a predominantly Muslim occupation been made victims of imperialist aggression, but the fascist currents that are becoming more popular in this continent are based on this Christians-as-victims ideology.
This is not a very new ideology and the "Christian" right has been imagining its fall from unquestioned American religious privilege for a long time now.  Here is a video that I was shown when I was barely a teenager that has always disturbed me:

The ideology promoted by this video (aside from the awesome styles of the late 80s and early 90s) is that the removal of prayer from schools in 1962 is the reason for rising crime rates, the erosion of public education, drug addiction, teenage pregnancy, and certain supposed immoralities.  The use of the word "religious apartheid" is offensive but telling.  And the claim that it is "our turn now" - well that clearly does feel like a call to fascism, especially since they're demanding that the historical clock be turned back to the days before 1962 when Christianity was not "victimized."

But just what were those days before 1962?  Oh yes, the days of racial segregation, the days where women were property and rape was eh-okay.  "You remember those days and how great it was to live back then in America when you were a white, straight, Christian man?"  Either this video is an ignorant appeal to a time that never existed, or it is actually promoting the vile and hateful "family values" of that America.

Those complaining that Christianity is being victimized are people who want a Christian theocracy, and a Christian theocracy based on a very irrational, very intolerant version of Christianity that promotes the attitudes behind the categories I discussed above.  In other words, they feel they are victims because it is no longer socially acceptable for them to victimize in the same way as they did before 1962.

And really, if right-wing Christianity was actually victimized in North America why is it given so much free reign in society to perform the following "biblical and holy" tasks: target Muslim populations and build mass-movements around Islamophobia, suppress sexual education in high school, suppress the teaching of evolution and global warming in some places, prevent gay marriage, censor books (funny that the video spoke about the Bible being removed from libraries when it is the people in this video who have other books removed from libraries), agitate for military agression against people they don't like.

I am going to stop the post here, however, because it is longer and grumpier than I intended.  In fact, I wanted it to be filled with ironic humour and biting satire.  Maybe I'll have better luck in my next post...