February 24, 2016
Recently, I was reflecting again, based on reading some random online articles, on my longstanding frustration with the way in which dialectics––specifically dialectical materialism or materialist dialectics––is often used more as a buzz-word, or a rhetorical ploy, by so many of us Marxists.  As I've written elsewhere, we tend to throw at the word dialectical to brand some insight with authority, or inversely we use the word undialectical to brand something we don't like as erroneous, while it is not always clear if we're actually talking about dialectics in the first place.  Of course, the tendency to use jargon as rhetorical replacements for actual arguments is nothing new in the Marxist left, or any other theoretical tendency for that matter, and nor is an appeal to the term "dialectics" the only culprit in this regard.  (A couple weeks ago, for example, I was called an "idealist" by someone at an event because I didn't except the Avakianite "new synthesis": there was of course no argument as to why my rejection was idealist aside from the a priori assumption that the "new synthesis" was properly materialist, so all critiques of it had to be idealist, which (and I'm sure the irony was lost on this individual) would itself be a rather idealist assumption.)  Although I am a champion of the set theoretical language established my the struggles of Marxism, and do not think it is always necessary to look for replacement terms, I am also aware of the ways in which a particular language can encourage formulaic thinking––a kind of dogmatism where one memorizes certain words with a vague understanding of what they mean and then uses them like magical incantations to dispel doubt and reinforce belief.

The term "dialectics" is a very interesting example of this wand-waving rhetoric because usually, when you ask someone who makes such an appeal what they mean by "dialectics" they cannot give a very precise definition.  One of the problems, here, is that there hundreds of manuals, produced by hundreds of sects, that provide very mechanical definitions of materialist dialectics that are usually only half correct: at best they provide some useful formulas and general history about the importance of dialectical thinking; at worst they are filled with multiple errors.  For example, a common error in these texts is the treatment of analytic logic [or formal logic] which demonstrates so many misconceptions about what this logic does, its fundamental rules, and a severe downplaying of its significance.  Faced with this shit I can understand why the so-called "Analytical Marxists" felt the need to produce an intentionally undialectical philosophy of Marxism which, to be honest, was no lest mechanical than the "dialectics" of those they were opposing.

In fact, what characterizes most of these vague appeals to dialectics is an unreflective religiosity where dialectics is treated as a supernatural principle––where every relationship must be a vague unity of opposites, that there can be no moment where the principle of non-contradiction holds. (Which is not, I should point out immediately, very dialectical because if we argue that the principle of non-contradiction is either true or it is not true, and thus side with the not, we are appealing to it and thereby affirming its importance.)  So, for example, this asinine appeal to dialectics that I heard way back, in 2011, when I first involved myself in an electoral boycott: "while revolutionary politics is indeed in contradiction with making socialism through elections, we need to do both simultaneously to be dialectical."  Leaving aside the first complaint a logician would make about such a claim (this is not a literal logical contradiction but a debate between an exclusive or inclusive disjunctive), a clear-thinking radical could make an easy reductio ad absurdum with this argument: according to this logic it would be undialectical to privilege the proletariat over the bourgeoisie––which are classes unified by their contradiction––and, most importantly, there will be no moments where revolutionary necessity forces demarcating lines where one strategy needs to be taken over another.  The appeal to dialectics, here, is actually an appeal to liquidationism. (Note: I am not arguing that all appeals to using the electoral space are essentially "liquidationist", only that people who defend it simply because of a vague appeal to "because dialectics" are, reductio ad absurdum, making this argument.)  So five years after hearing that appeal to "dialectics" I have been growing more and more impatient with the rhetoric of dialectics.

Some time ago, based on this frustration, I wrote a small entry on dialectical materialism.  But since it was written in haste, and after years of not teaching formal logic (after my MA I took something of a hiatus from logic so I was quite rusty), it was not entirely precise.  A couple years ago I tried to rectify the gaps in this short piece by writing a small book on dialectical materialism which, at the time, I intended for publication.  Unfortunately, I was unhappy with this book and, upon receiving a rejection from one publisher to whom I'd submitted the draft decided that the reasons for this rejection was correct; it was kind of boring, textbook, and more of a manual than an interesting work of theory.  Fair enough: if I was a publisher, whose decision for publishing something is whether or not it will at least recuperate the printing costs, why would I be interested in selling something that is just a manual approach to what dialectics is, why it is important, and why so many conceptions of it are mechanically useless?  If I was living in the Soviet Union in a time when the debates about the meaning and importance of dialectics were raging, or in China during the Cultural Revolution when Zhang Shi Ying wrote one of the best engagements with dialectical materialist reasoning, then maybe this kind of book would be worth printing.  So, realizing the contextual limitations of the investigation, I set the draft manuscript aside––meaning to return to it and transform it into something a little more interesting––but then ended up focusing my attention on other manuscripts instead (one of which, The Communist Necessity, I published a year later).

But then, half a year ago, one of the more notorious anti-dialectical internet Marxists happened upon that old and flawed entry about dialectical materialism and felt the need to troll it with their usual shotgun approach: not a singular and coherent argument, but a rhetorical nit-picking, which pretty much undermines the rules of formal logical engagement, but the internet is such that these kinds of contradictions are common.  To be fair to this critic, I was more dismissive of their complaints than anything else––truthfully, I didn't have the energy or interest in dealing with someone who was functioning according to an ad hoc philosophical ideology; I didn't want to be drawn into an endless argument.  And to be entirely honest, one of the reasons I did not really care about engaging with these criticisms was because I wasn't entirely committed, as aforementioned, to what I wrote in that post and, in some ways, was (and am) quite sympathetic to the complaint that most people who talk about dialectics intentionally misconstrue analytic logic.

I mean, not that I'm trying to shock some of my readers, Engels' Dialectics of Nature is a shite manuscript.  I'm not saying that it doesn't have some interesting moments, some points worth examining, but as a whole its entire argument is both mechanical and metaphysical.  While I could point out that it was not intended to be published because, most probably, Engels realized it was flawed and thus didn't complete it, this insight matters very little considering how it has been taken up as some essential development of materialist dialectics.  (And never mind the fact that, unlike Anti-Duhring, which is a masterful work, there is no evidence that Marx edited the manuscript since he died a year after Engels stopped working on it.)  What is most interesting about Dialectics of Nature is that it is used as proof for the natural immanence of dialectics (which is a philosophical and non-scientific decision, i.e. idealist) by so many people who, at the same time, can't explain what the hell dialectical reasoning is except by tautological references to books like this one: materialist dialectics is dialectics of nature, Dialectics of Nature seems to be scientifically correct so dialectics must be correct.  But here's the rub: as some of my Hegelian colleagues who bother to read Engels have pointed out, Dialectics of Nature actually doesn't really concern dialectics but, in fact, uses Aristotelian categories to describe nature and brands them "dialectical".  Indeed, I have not read one defense of Dialectics of Nature that succeeds in defending, or demonstrates any understanding of, dialectical logic.  Rather, these defenses go like this: Engels' understanding of science in Dialectics of Nature was correct, so––QED––dialectics is natural.  But if Engels wasn't demonstrating dialectics in nature in the first place, then it doesn't matter if he was making any useful scientific points: dialectics is not some immanent principle of nature, nor can it be (without falling back into ontology), and whether or not Engels was correct about x, y, or z science in Dialectics of Nature does not mean that he was correct that this was dialectics operating in nature because what he described was not in fact dialectical.

But I won't waste too much time going down this rabbit hole, here, because this is precisely one of the things that I discuss in that manuscript and now, a couple years after it was written, and it's just gathering metaphorical dust on my hardrive, I figure I should do something about it.  To be honest, I'm not entirely committed to all of the claims that it makes––which is probably why I would edit it further if I was going to publish it legitimately––but I still think that there's enough in this document that is useful as a manual for dialectics to be offered here, gratis, to those who are actually interested in dialectics.  And, not to toot the horn of my own qualifications too much (which are only good, to be honest, for a life of casualized adjunct faculty labour these days), since the conceptualization of "dialectics" is a philosophical concern––indeed, even the doctrinaire approach to "diamat" claimed that dialectical materialism was the philosophy [and hence not the science of nature, sorry Engels, though the Soviets did undermine Stalin's claim here––blame the Plekhanovist influence in Soviet academy] whereas historical materialism was the science––I do happen to know something about it because it's kind of my area of expertise.

The manuscript is entitled Torsion and Tension and, starting from this post, I plan to publish a section in chronological order: this is a way to give me a series of multiple blog posts, in a time when I don't have a lot of time to blog, and so accomplish the proverbial killing of two birds with one stone––lack of posts, a manuscript gathering dust. 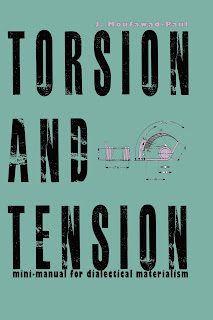 Let's begin with the prologue.  Once I get a chance to do some light copy-editing on the other chapters I'll release them sequentially.