November 08, 2012
Several days ago, on November 2nd, Han Suyin died.  Aside from the obligatory obituaries in official newspapers, her death was met with little attention: she died in obscurity, like so many revolutionary women, almost forgotten by a world that was once forced to pay attention to her literature.  If she is still remembered in popular culture––if she has affected the memory of those who will ask who? at the mention of her name––then it is probably because of the 1955 movie adaptation of her novel A Many Splendored Thing that also inspired a pop song and subsequent cliche.  But when people speak the banal colloquialism that "love is a many splendored thing" it is doubtful that they know anything of Han Suyin or what she represented.  And she represented so much more than a terrible movie adaptation of a novel she wrote when she was young, let alone its even more terrible pop song and trite saying. 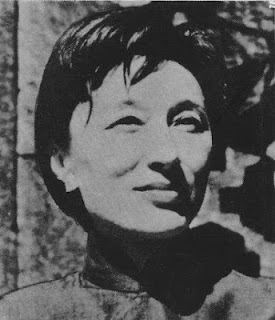 At one point Han Suyin was an apologist for the Chinese Revolution.  Born Elizabeth Rosalie Chou, a "eurasian" woman who came of age in China on the eve of the revolution led by Mao, Han would eventually become one of the Revolution's literary representatives to the western world.  She was a medical doctor and a novelist who, after she was slowly and surely politicized by the revolution, would write social biographies of Mao Zedong and the Chinese Revolution––defending its necessity, from its beginning to the Great Proletarian Cultural Revolution, to the english-speaking world.  And though, at the end of the 1970s, like so many communists she made the mistake of believing that the China under Deng Xiaoping would continue the revolution––that China was not going down a capitalist road––she would soon become jaded by China's path to state capitalism and retire, living in near anonymity, in exile in Europe.  In the mid-1990s she would write a biography about Chou Enlai and in this biography, against the grain of both western and Chinese scholarship, uphold the Cultural Revolution, but by that time her anonymity was almost sealed and that book was largely ignored.  And after that book silence… Now she is dead.

More important than her novels and historical biographies, however, was her five volume memoir that placed her political development within China's unfolding revolution.  A series of books where the personal was political and the political was personal, these memoirs not only used her subjective experience to document and justify the revolution led by Mao all the way up to the end of the Cultural Revolution, but also served as a protracted literary self-criticism.  They charted her journey to communism where the older Han Suyin would critique the young and petty-bourgeois Elizabeth Chou while, at the same time, throwing the shadow of world historical events over her tiny and limited experience.

Although these memoirs were, by the publication of the third instalment (Birdless Summer), described as "a masterpiece in progress" by The Observer, by the 1990s they were largely out of print.  And by the 21st Century publishers, in a resurgence of anti-communist furor and the so-called capitalist "end of history", would never consider touching a literary memoir that defended Mao and the Chinese Revolution––instead these publishers were glutting book stands with poorly written and reactionary memoirs such as Jung Chang's Wild Swans.  Han Suyin's memoir counter-point to this backwards "wound literature" was considered anathema; no publisher was interested in a series of books, regardless of their literary value, where the author would the Cultural Revolution even when she herself was attacked for being petty-bourgeois.  No publisher would seriously consider putting back into print someone who would start one of her memoirs by writing:


"Standing on the Canebiere of Marseilles in 1967, I re-enter that unsympathetic selfish twenty-year-old girl of deadly ignorance, Rosalie Chou, who stood on this very same spot in 1938, the tears upon her face buffeted by a gritty mistral. Phantom sob, ghostly wind, of a yesterday that chose today, when again the famishing need for a reality beyond the benevolent mummery of success reasserts its raucousness. On the threshold of yet another war, of far larger dimensions, an even more stringent choosing. Today the East is Red, the future has entered our present, has transformed it long before its own advent. The world continues what began in China yesterday. The mistral sings its name is Revolution, World Revolution." (Birdless Summer, 9)

Despite the fact that in 1968 The Daily Telegraph would claim that Han's multi-volume memoirs would be "re-read two generations hence as one of the key documents of the twentieth century" these books are largely forgotten.  Now the Jung Changs of the world have replaced the Han Suyins and we are meant to believe that the memoirs of the former are somehow more legitimate than the memoirs of the latter.  Han retires, forgotten, in Switzerland after Deng's coup; Jung Chang and her ilk continue to publish their reactionary memoirs that confirm everything westerners want to believe about revolutionary China.

When I first encountered Han Suyin's memoirs, after picking up the second volume (which I still think is the best although I cannot be sure if this is simply because it was the first one I read) at a second-hand bookstore, I was shocked by how contemporary they seemed.  Indeed, at a conference in Winnipeg several years ago, I presented a paper arguing that Han should be reclaimed by radical history because, far ahead of her time, her memoirs demonstrated all the concerns of post-colonial theory while still demonstrating fidelity to the supposedly "totalizing" narrative of communism: she understood and attempted to theorize orientalism, she discussed the feminization of the East by westerners and the rape narrative inherent in this feminization, she ruminated over the problem of cultural hybridity (being half-Chinese, so-called "half-caste", and what this meant in terms of identity), she performed a five volume articulation of auto-ethnography.  And in all of these, in these books that deserve republication, she upheld the world historical revolution in China under Mao.

Indeed, her second historical biography on Mao, Wind In The Tower, has been described by at least one of my friends (somewhat disparagingly) as a "hagiography" of Mao––but I would ask, in this anti-communist and anti-Maoist climate, is this necessarily a bad thing?  And isn't knowledge a class struggle where there are biographies and histories produced from below or from above, and since to imagine something "properly academic" or "properly neutral" is impossible, it is better to clearly take a side––better to be, in the moment of revolutionary upheaval, a conscious propagandist?  And, most importantly, in light of her more personal and critical memoirs where she discusses being attacked by Red Guards at certain points for her political failures, isn't it significant that she would produce books upholding both Mao and the GPCR?  But all of these books are now out-of-print and Han Suyin is dead.

Unfortunately, due to the fact that the majority of her books are out of print, Han will mainly be remembered for A Many Splendored Thing––that semi-autobiographical novel that was written before she was a communist.  Even worse, she will probably be remembered for the movie adaptation where a white woman wearing eye make-up played her fictionalized self (since non-white women were not allowed to act as main characters in Hollywood at the time) and a complex novel about interracial love affairs in racial contexts was turned into another Hollywood romance.  But those of us who are communists need to remember Han as an apologist for a world historical revolution––someone who spent decades attempting to make the Chinese Revolution palatable to even her bourgeois readers in the west––and find a way to reclaim her histories and memoirs.  For on November 2nd, on the eve of the re-election of the prime representative of the dictatorship of the bourgeoisie that some self-proclaimed communists seem to care about, a significant propagandist of historical communism died.


For those interested in reading Han Suyin here are the books I would suggest: A Mortal Flower [second volume of her memoirs]; Wind In The Tower [second volume in her biographical history of Mao and the Chinese Revolution]; The Enchantress [a novel about the demystification of the European world].  All of these books are out of print but can be found on online used books sites, as I found them, for very cheap.